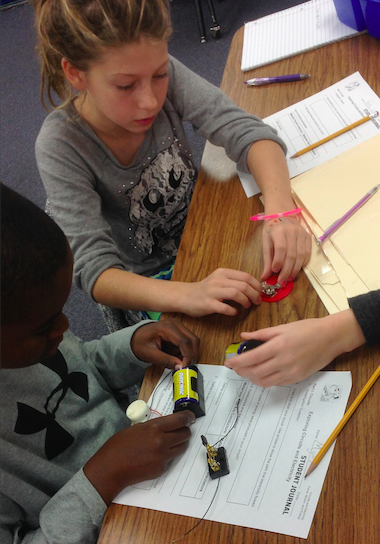 Psychologist Lev Vygotsky once said, “A child’s play is not simply a reproduction of what they have experienced, but a creative reworking of the impressions they have acquired.”

For the project, students at the Flower Mound campus on Timber Creek Road were asked to create a game made of circuits and create five different fifth-grade level questions a player would need to answer before connecting the next circuit. Most students used math problems, bu t some pulled questions related to different content areas.

“I really like this because it teaches us how to make circuits in fun ways,” student Ethan Haun-Granado said. “Also, I think that it’s amazing project because it also connects with math.”

As another component of the project, students wrote explanations to describe the process using specific academic vocabulary words such as: insulator, conductor, closed and open circuit and current.

For what was a game to students, it also served as an assessment tool for the teacher.

“This game served as a performance assessment for my students, who were able to show their learning by creating the circuit and then explaining how it worked,” Wilkinson said. “I hope that this experience gave them more confidence in their understanding of electric circuits, and a greater ability to problem solve why a circuit might not be working.”