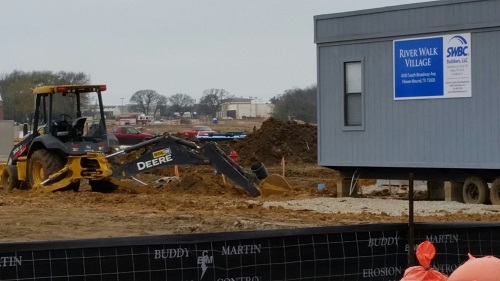 An update on the 158-acre River Walk at Central Park left some Flower Mound Planning and Zoning Commissioners disappointed when they learned retail and office space was trimmed. Others say they are still excited about the project designed to be a central community hub.

As one of two major mixed-use developments currently under construction in Flower Mound, the River Walk between Morriss Road and FM 2499 north of FM 1171 has been projected as an entertainment mecca with the town’s first hotel, an amphitheater, chapel, restaurants along the river, a farmer’s market, public art, retail, medical, residential and more.

“I think it’s going to be beautiful. It’s just not that interesting to me anymore. Sorry,” said Commissioner Don McDaniel after hearing about the proposed 28 changes to the project, which included almost 1 million fewer square feet in office and retail space due to cutting the multi-storied developments initially projected and removing retail and office from the east side. The original concept showed retail and office downstairs topped by apartments on the east side. The new concept shows brownstone-style town homes.

Commissioner Michael McCall echoed McDaniel’s sentiments: “This is watered down. This isn’t a town center, it’s a townhouse development.”

Others disagreed, indicating they were glad the developer was being prudent in cutting space that could have been hard to fill.

Bobby Dollack, a project engineer with G&A Consultants, told commissioners all of the amenities remain in the project. The difference, he said Monday in an update, is that earlier projections called for multi-storied buildings and more retail and office space than could realistically be filled at the project.

“You could put Southlake, Parker Square and The Shops of Highland Village all in this area – that’s how large it is,” Dollack said, adding they were simply scaling back the initial vision to a more realistic view. “It’s our concept of what was promised.”

The original plans showed 6- to 10-story buildings with four-story parking garages – creating an urban environment that would not be easily supported at a development considered off of such major corridors as Interstate 35E and Interstate 35W.

The residential changes do not affect the total numbers, Dollack said, but simply reflect a rearrangement to include more town homes and fewer apartments.

Other changes include re-arranging streets to accommodate a better traffic flow and to allow the river-level restaurant atmosphere. A proposed senior living area will now only offer independent living options, Dollack said.

Developers are still talking to other companies, seeking entertainment venues similar to Dave & Busters, as well as other retailers not in the area. Dollack said their intent to bring a movie theater to the development was trumped with the announcement of the theater at Lakeside DFW, but they believed the 3,000-seat amphitheater would bring a different kind of entertainment venue.

Mehrdad Moayedi, president and CEO of Centurion American, told commissioners he was still excited about the project that will bring the town its first hotel, an amphitheater that will offer up to 20 shows per year as well as free community events and public art that will grace the development throughout. He also reminded commissioners that some of the restaurants coming to the River Walk from Oak Lawn would not have done so for just any project.

Centurion American has developed a number of projects around the Dallas-Fort Worth region including nearby Saddlebrook Estates as well as Kensington Gardens, Frisco Ranch and others. River Walk at Central Park, Moayedi said, will continue to be a first class development, but a more realistic one.

Construction continues on the River Walk, in which an estimated $4.5 million in infrastructure has already been completed. Construction of the villas will begin in February. The river is expected to be flowing by March, Dollack said, adding the project also includes two pedestrian bridges – both with views of the proposed waterfall. The west side is expected to be finished by the summer of 2016 with the plaza ready by the end of 2016.

Commissioners recommended approval of the changes, which will be outlined to the Flower Mound Town Council on Thursday.