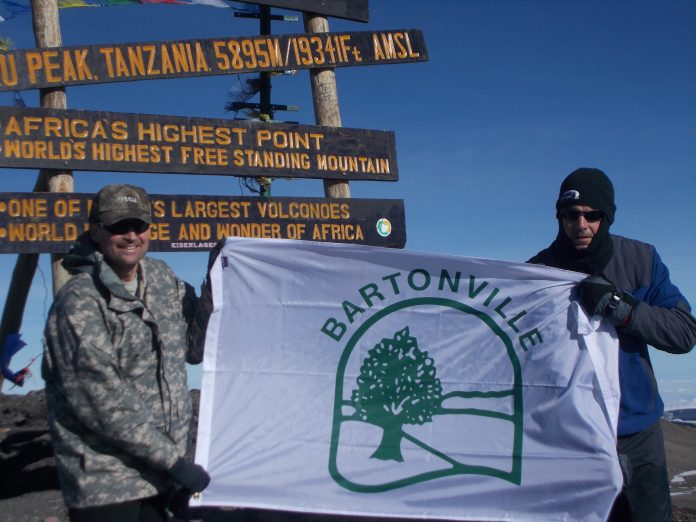 It was a trip to remember – as much for the accomplishment of climbing one of the world’s tallest mountains but also for the opportunity to leave everything electronic behind for a bit.

Bartonville Mayor Bill Scherer and council member Jeff Traylor both recently flew in to Africa for a trek up Mount Kilimanjaro, a dormant volcanic mountain in Tanzania. Known by some as the mountain of greatness, Mount Kilimanjaro is the highest mountain in Africa and the fourth highest in the world at 19,341 feet above sea level.

“It was an incredible trip,” Scherer said, describing the preparation before the climb, the experience of climbing the mountain and seeing the view from atop Mount Kilimanjaro.

“It was seven days of no electronics – the first time in 30 years,” Scherer said.

Several friends were planning the trip and asked Scherer if he wanted to go. He jumped at the opportunity.

The trek itself required significant advance training and planning. Scherer walked 12 miles throughout Bartonville on Saturdays and Sundays before the October trip. A side benefit was being able to take inventory of all of the town’s roads, he said chuckling.

Getting to Tanzania was an arduous journey – flying from Dallas to Amsterdam to Tanzania. The trip to Tanzania took 24 hours; the trip back home took 36 hours.

After sleeping one night at a hotel, it was time for the climb.  Guides, similar to the Tibetan sherpa, carry the water and supplies. Often, they would tell the climbers to slow down as their bodies adjusted to the higher altitudes. Scherer noticed, however, that the guides appeared acclimatized to the area.

“They can move extremely quickly up and down” the mountain, Scherer said.

At 10,000 feet, the group could see above the clouds. Atop Mount Kilimanjaro, it was cold at below zero with the wind chill factor. Sitting on top, he saw 100-foot tall ice glaciers.

But what struck him the most from the trip was how fortunate he is to be a U.S. citizen.

“Every time you go to another country, you learn how fortunate you are,” he said, referring to the area’s lack of running water and indoor plumbing. “You always get what it means to be an American and the opportunities it provides for us.”