Bartonville to get town monument 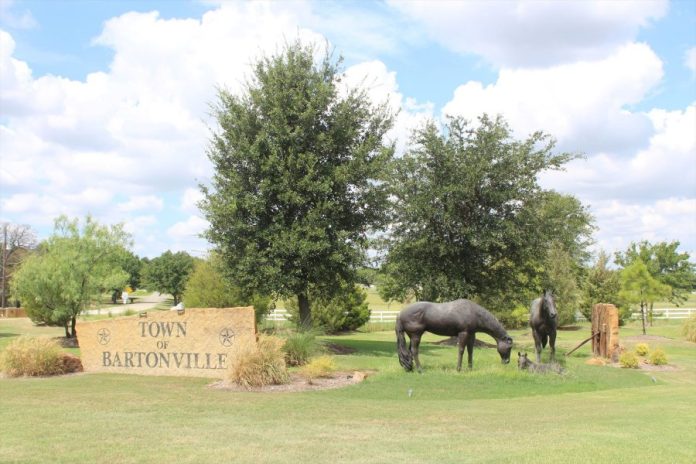 With a nod to both its past and its present, the Town of Bartonville is preparing to establish and commemorate its rural and pastoral nature on a small island of land at FM 407 and McMakin given to it by the county upon completion of the FM 407 curve, now referred to as the ‘Bartonville Bypass.’

“Mayor Ron Robertson said we ought to put up a ‘Welcome to Bartonville’ sign on the site and there was consensus the town could use an identity for all those driving by, and increased visibility for our businesses,” said Mayor Pro Tem Carla Anderson.

“The important issue,” Anderson continued, “is we want an understated identity, and one that would complement our rural heritage.”  As Town Administrator, Debbie Millican, points out, “This is a real old community and the piece of land we will be using is the original site of Bartonville’s trading post.”

Selecting the look that would accurately capture and reflect the essence, individuality and distinguishing features of Bartonville was not easy. It took great thought, numerous designs and multiple meetings, to settle on what seemed most evocative of Bartonville, Texas.

“At the end of the day,” Anderson says, “Bartonville is a horse community.  When we found the sculptor Kelly Graham, who lives over in Weatherford, we knew we were headed in the right direction. When Kelly is commissioned to sculpt a horse, he boards and studies it for months, to make its every detail recognizable to its owner. While Bartonville didn’t loan Kelly any horses to use as models,” said Anderson, “the town has purchased two of Kelly’s life-size mares and a colt, that will ‘graze’ on the town’s new gateway to Bartonville.”

In addition to the sculpture, a ‘Welcome to Bartonville’ sign and native boulder will be part of the landscape design for the area, with a completion date of May 1, 2010. The plants, all of which have been selected by Anderson, will be native, eco-friendly and drought-resistant, among them live oak, lace bark elm, buffalo grass and a wild flower mix. Funding for the project has come from the town’s Economic Development Corporation, sales tax revenues and from the county’s fiscal commitment to landscaping and beautification, following the road improvements.

We’ll never know what T. Bent Barton would think of the gateway project, but the man for whom the town was named in 1878 would probably be proud of all the town has done since his day to actively preserve and protect the place they’re proud to call home.