Travel with Terri to Santa Barbara … The American Riviera 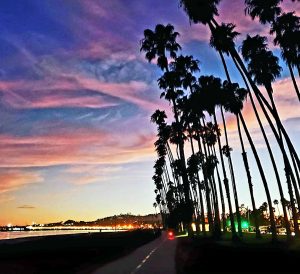 Santa Barbara has been called “The American Riviera” by travelers for nearly a century. Nestled between mountains and the Pacific Ocean, Santa Barbara is a self-contained paradise. The city’s distinctive Spanish-influenced architecture and lush landscape has the look of the European Riviera. There are relaxing resorts and hideaways, outdoor escapes, world-class wineries, arts and cultural attractions, and one of the very best food scenes in the country.  It is simultaneously sophisticated and bohemian. And the locals are very warm and welcoming. This is one cool coastal destination that I think is the best beach town on the west coast! I fell in love with Santa Barbara as it checks all the boxes for this travel writer.

Mother Nature has given Santa Barbara One of its best assets – a dreamy moderate Mediterranean climate year-round with an average of 300 days of sunshine. It has a unique east-west coastline that provides a soothing year-round southern exposure. Daily temperatures range from the mid-60s to mid-70s.

It’s a great place to just relax and rejuvenate. There are many first class spas and wellness offerings in the area. We had an early morning yoga session with Santa Barbara Beach Yoga, then on to a luxury spa experience at the Salt Cave Spa. This has to be one of the coolest, most unusual spa experiences I’ve ever had. Imagine spa treatments in the largest underground crystal salt cave in North America. 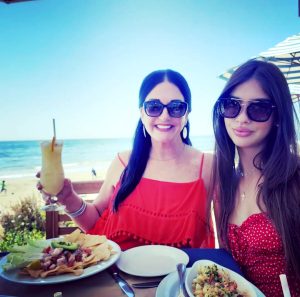 We discovered so many delectable restaurants and stellar wine selections. A few of my favorites are Flor de Maiz, Jeannine’s, Scarlett Begonia and Grassini Family Winery.  Zaytoon is now my all time favorite Mediterranean Restaurant and the atmosphere is just magical. And for beachside dining and great seafood, don’t miss The Boathouse. This is an iconic Santa Barbara seafood restaurant with one of the best beach locations around, tucked away in a quiet part of town facing Hendry’s Beach.

Taking advantage of fresh ingredients paired with local wines and beers, you’re sure to discover some of the most delicious culinary delights that are unique to the area. Santa Barbara’s mountains-to-ocean terrain makes a spectacular setting growing wine grapes—and savoring the results. The Santa Barbara Urban Wine Trail showcases the winemaking styles of this acclaimed wine region. With nearly three dozen tasting rooms, the trail spans walkable areas, such as the popular Funk Zone and historic Presidio Neighborhood. 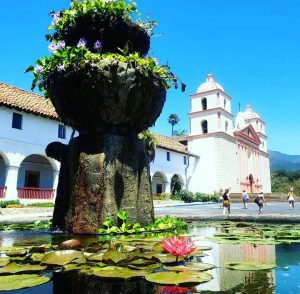 The California Mission Trail also passes through this area and features the Queen of the Mission Trail – Old Mission Santa Barbara. This historic landmark, established in 1786, is the 10th of 21 California Missions set up by the Spanish Franciscans. A great way to get to the mission is by the Santa Barbara Trolley. This is a fun and informative way to get a great broad brush tour of the area.

Another option for getting around town was with the Santa Barbara BCycle – it’s 100% electric. This was my first e-bike experience and I am now a fan. We could go farther, faster, sweat less and have way more fun!  Santa Barbara has many scenic bikeways and has been ranked as the fourth best biking city in America. An easy route is the palm tree-lined Cabrillo Bike Path, which passes over three downtown beaches including Santa Barbara Harbor.

Santa Barbara is also very walkable, so we spent a lot of time strolling along the State Street Promenade. This downtown area has a European city feel with a mile-long stretch of shops, restaurants and bars. State Street has a very cool vibe and is a vibrant place!

For sensational sunsets, head west and check out beautiful Butterfly Beach in Montecito. This little nearby town is ideally situated between the Santa Ynez Mountain and the Pacific Ocean. Montecito may be best known as a “celebrity enclave,” as it has a concentration of many prominent residents and celebrities…but it’s also home to great restaurants and shopping. However, its natural assets are the real stars of the show. This is a great place to hike, ranging from easy nature walks to challenging climbs…and a bonus – epic views!

Just north of Santa Barbara is the seaside town of Goleta. And, it’s home to much more than the University of California, Santa Barbara. It’s also known agriculturally for its avocado and lemon tree farming. Goleta is a 10-mile stretch of scenic agricultural and coastal land. Goleta Beach is where you’ll get close up views of dolphins and sea lions or surf among the locals at the acclaimed Campus Point surf break.

So where to stay? This dazzling coastal oasis does offer a variety of accommodation experiences and price points — Spanish Colonial-style bungalows, luxury resorts, contemporary hotels, vintage motels and neighborhood inns, they have it all! We enjoyed staying at The Franciscan Inn & Suites that offers Spanish-style rooms and suites surrounded by lush landscaping and towering palm trees. It’s both beautiful and quaint and has a very helpful and friendly staff. Best of all, it’s only one block from the beach and harbor! 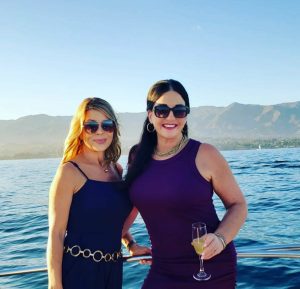 Santa Barbara is a world-class destination with palm-lined beaches set against a sweeping mountain range. This coastal area provides an idyllic landscape for boundless exploration, from the mountains to the sea. So, pack your bags, throw on your shades and make plans to go to Santa Barbara for an unforgettable experience in one of the most beautiful places on earth!

Follow Terri on Social Media at Travel with Terri from Texas 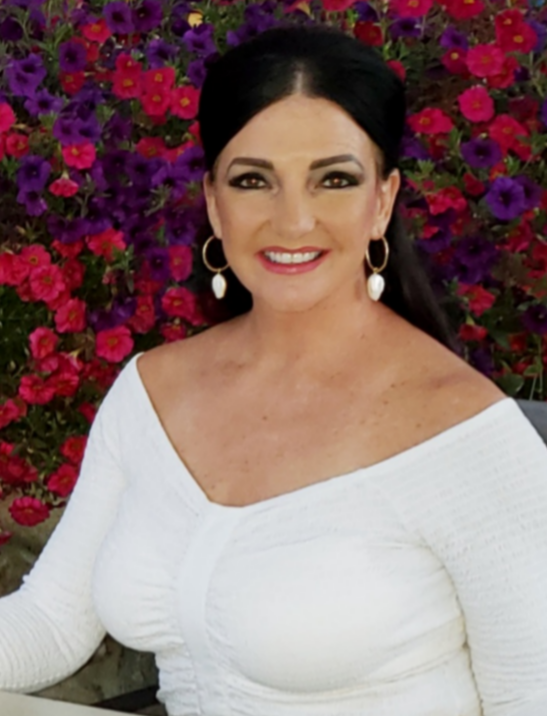