“The Meow Wolf story universe is expanding, and Texas holds the key to our next chapter,” said Meow Wolf CEO Jose Tolosa.

Known for its rich history and hospitality, Meow Wolf will bring a whole new level of entertainment for guests of all ages, said a news release from the Grapevine Convention & Visitors Bureau. The company aims to “transport audiences of all ages into fantastic realms of story and exploration” with its exhibits. 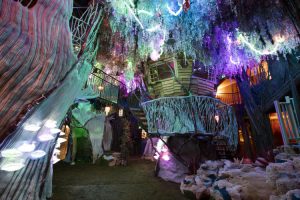 Texas native and Meow Wolf Founder/Senior Creative Director, Matt King, moved to New Mexico after high school, where he met the rest of the group who would later form a DIY art collective called Meow Wolf, according to a Meow Wolf news release.

“Fast forward to today and we have grown that little art collective into a pioneer of the immersive arts and entertainment industry with a mission to build community through art,” said King. “I could not be happier to bring Meow Wolf back to the place that I grew up to be a positive addition to my first community.”

“Our city is a premier destination for entertainment, and the interactive installation these artists will build at Grapevine Mills pairs perfectly with the high-quality restaurants, wineries and family-friendly activities we have worked to place all over our fine city for decades,” Tate said.

“Malls have been such an incredible and weird part of the American story, especially for a lot of us that grew up in the 80s and 90s,” Kadlubek said. “It is an exciting thought that these spaces could be filled with incredible art and immersive experiences, opening a new era of opportunity for the creative economy. We felt like Meow Wolf could help lead the way.”