Medal of Honor motorcade to roll through Denton County

The annual trek of Congressional Medal of Honor recipients through Denton County will take place on Wednesday, according to a news release from the county. 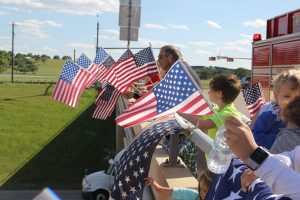 Medal of Honor recipients will fly into DFW Airport on Wednesday and a large motorcade of public safety vehicles will escort them from Hwys 183/360 to Hwy 114, westbound to I-35W and then take that north to Gainesville for the city’s annual event honoring these national heroes. This year will have a historic number of agencies participating in the motorcade, including many from southern Denton County, which will significantly affect traffic late Wednesday afternoon.

The motorcade is expected to stretch 8-9 miles long with more than 550 vehicles participating. They are expected to leave the staging area on the south end of the airport sometime between 3-5 p.m. Many access points along I-35W and I-35E will be temporarily shut down during the motorcade. Many residents will line up along the motorcade’s path with U.S. flags to show their support for the Medal of Honor recipients.

Drivers should expect significant traffic delays and are encouraged to avoid these highways during that time. Drivers should pull to the right lane when approached from behind by the motorcade.

Click here for more information about the Medal of Honor Host City Program.