A southern Denton County resident is inviting the community to attend an event this month to learn more about the issue of human trafficking in the area and in the state.

Greer said she didn’t know much about the issue when there was an awareness event at her church about five years ago. Then, about two years ago, she said someone tried to pick up her teenage daughter near the intersection of FM 407 and 1830. Since then, she’s done a lot more research and has grown much more concerned about the issue around the world and in her backyard.

“It doesn’t matter what area you live in,” Greer said. “They don’t care where you come from. 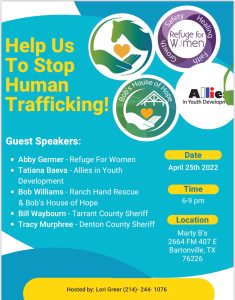 Greer has rented out the large upper room at Marty B’s restaurant in Bartonville from 6-9 p.m. on Monday, April 25 and is inviting the community to come learn more about human trafficking. Several speakers will discuss the prevalence of trafficking in the area and the work being done to help victims.

Greer said she hopes the event will inspire more people to help prevent trafficking and to help victims.

“I don’t think we can bring change if we don’t waken people up to what’s going on,” she said.