About 150 Argyle-area residents turned out Wednesday night for a community meeting about the proposed Harvest Town Center by Hillwood Development Company.

Harvest Town Center will be a mixed-use development in the northwest corner of I-35W and FM 407, with a grocery store, restaurants, other retail and “urban living” multi-family homes. The property is in Argyle’s extraterritorial jurisdiction, or ETJ, so the town’s only involvement will be in the subdivision review process. 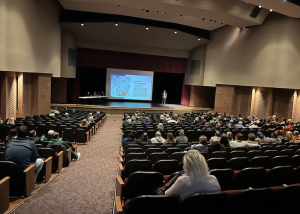 During the meeting, Miller said the name of the grocery store still can’t be revealed, but he said the announcement will probably come in a few months, and the grocery store is expected to be built and opened by fall 2023. He promised the grocer will be one that most, if not all, local residents are familiar with.

After the grocery store, the “urban living” units were the hot topic for most residents at the microphones. Hillwood representatives revealed that they are planning to have a mixture of high-end townhomes and two- to three-story apartment buildings, with a total of about 400 units around 17 units per acre. Rent costs are expected to range from $1,500 to $3,000 per month.

Some residents complained that “urban living” didn’t fit with the rural atmosphere of the area, and others expressed concern about a potential increase in crime caused by apartments. Hillwood representatives tried to abate their concerns, saying there wouldn’t be much crime caused by high-end apartments, but most didn’t seem convinced.

“Why do you trash the development by bringing in renters and apartments,” one resident asked. “You’re going to trash our property values.”

Harvest Town Center will be on next week’s Argyle Planning & Zoning Commission agenda, according to the town of Argyle.