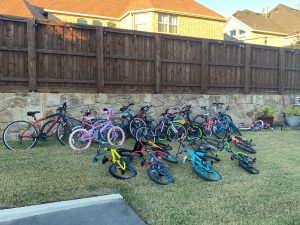 Update on Dec. 1: Rohan Ahuja has collected more than 30 bikes and received $300 in donations to buy more bikes. They are seeking some local businesses to help with locks, helmets, repairs and trailers to transport the bikes to Fort Worth.

Original story on Nov. 15: A Flower Mound teenager is seeking donations of new and gently used bicycles to donate to kids in foster homes for Christmas.

Rohan Ahuja, a junior at Flower Mound High School, has launched a bike drive with Chosen Ones Foster & Adoptive Family Support, a Fort Worth-based nonprofit. Last year, Rohan’s uncle started a similar bike drive in Corpus Christi, and it impressed and motivated Rohan to start his own.

“He wants to do this drive every year going forwards,” said his father, Pankaj Ahuja.

Rohan has collected nine bikes from neighbors already, and his goal is to collect 50 in total, then ask local businesses to donate locks and helmets. They will also need help with potential repairs and trailers to transport the bikes to Fort Worth.

Rohan is collecting bicycles of all sizes until Dec. 15. Donations can be dropped off at 404 Winfield Circle in Flower Mound. If you can’t drop off your donation, and the bike can fit in a Honda Pilot SUV, the Ahujas can pick it up from you. If you want to help with trailers or repairs, or you need your donation picked up, call 630-312-0862.