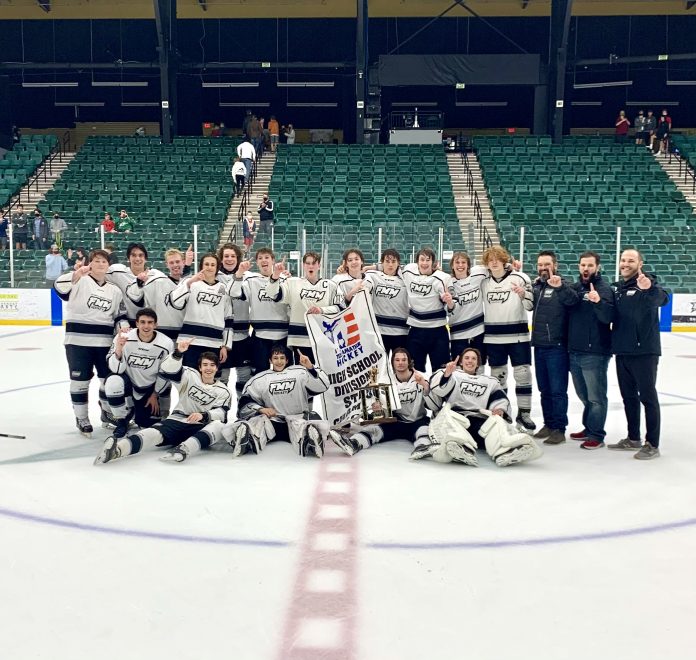 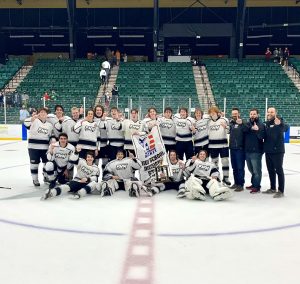 The team was created about six years ago when the Flower Mound and Marcus hockey teams — rivals — joined forces due to dwindling numbers and risk of both teams disbanding. The team — which plays in the AT&T High School Hockey League — finished the regular season with a 12-6 record (7-0 in the last seven games) and went 3-0 in the city championship playoffs for its first regular season championship.

The team then won a single-elimination play-in game to qualify for the state tournament, and advanced to the championship game against Frisco. Brody DeJong had FMM’s first goal, while starting goalie Michael Burgos stopped 44 of 45 shots on the night. Early in the second 10-minute overtime, Ayden Frolik slipped in behind the defense and put in the championship-winning goal.

Chris Turner, president of the Flower Mound/Marcus Hockey Association, said he is extremely proud of the team’s success during a challenging season due to COVID-19 protocols.

“Due to the various COVID-19 protocols put in place by the league, the team was short players more often than not for the first few months of the season,” Turner said. “To see their growth not only as players but as young men has been incredibly rewarding, and I could not be happier for them in their success. They have truly set a new high bar for our hockey club.”

Turner said linemates Griffin Joy and Ayden Frolik chased each other to be the team’s top goal scorer all year, and they finished the regular season tied with each other for second place in the league. Standout player and co-captain Austin Norman won Defensive Player of the Year honors from the league.

“His leadership on and off the ice played a significant role in the team’s cohesion throughout the season and they’re coming together at just the right time,” Turner said.

The team is currently playing in the Div. 2 National Tournament in Omaha, Nebraska.