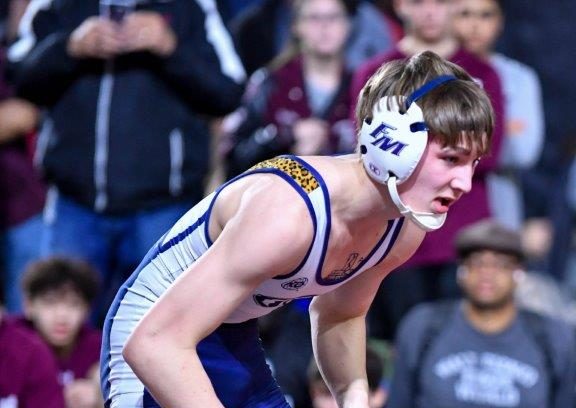 Competing in any sport during a global pandemic is difficult.

Coronavirus has created within most of us a feeling of fear and anxiety in wondering, “Will I catch it?” “How would it affect me?” or “Am I doing enough to protect myself and my family?”

Precautions can be taken in most sports to assuage these anxieties, but what about when the sport includes near constant contact, no social distancing, and an ever-present potential for particle exchange?

For wrestler Luke Cambere, these risks become a reality every time he steps onto the mat.

A state placer in 2019-20, the Flower Mound senior is attempting to make another run at a state championship this coming season, but with a vastly different set of parameters than what he faced last year.

“I’m not sure you have enough room to print all of the changes we’ve made due to COVID,” Flower Mound wrestling coach Steven Davis said. “I guess the biggest is that the UIL has moved the start of our season from November to February. (Editor’s note: The 2020-21 Texas UIL wrestling season has been delayed until further notice as of Dec. 17, 2020) This will be the first time in over 30 years that I’ve not participated in wrestling practices and tournaments over Thanksgiving and Christmas. At FMHS, we also take the temperature of each athlete before they are even allowed into the locker room.

“Dressing out takes forever, as only five athletes are allowed into the locker room at a time. Athletes sanitize their hands and shoes before stepping onto the mat, and their headgear when they come off the mat. Athletes wear long sleeves and long pants in practice. They apply a product to all exposed skin that provides a barrier between the skin and microorganisms. They are limited to one practice circle on the mat, and the same workout partner for a week, and all athletes wear a face covering at all times except when we are having live contact.”

But the precautions do not stop there.

“Another huge change is the way we clean the mats,” Davis said. “In addition to mopping the mats with disinfectant every day, we now use a device called a Sterilaser, which uses UVC radiation to destroy microorganisms on the mats after each practice session. I have no evidence to confirm that it kills COVID, but I can attest that it has almost eliminated skin conditions that are common to wrestling.”

Even with all of these steps that are being taken, Davis said he believes his athletes are in for more.

For Cambere, while very much aware of the situation with the coronavirus, he has not let it get him down and is not overly concerned.

“Some people would let COVID-19 affect their training and practice hours,” Cambere said. “But other people I have trained with in the past who have already won state championships, and myself, improvised and persevered. For example, I’ve turned a room in my house into a weight room with a small mat, and I’ve scavenged the Dallas/Fort worth area trying to find an open mat club. That’ll be the difference between me and whoever stands in my way to a Golden year.”

Cambere won 48 matches in 2019-20, along with a district championship and finishing runner up at region, but it was still not the season he said he was hoping for.

“There is always more room to grow,” Cambere said. “So I am treating last year’s season as a warm up to the goals I’m looking forward to achieving this year.”

Cambere’s wrestling journey has not been without its detours, but he said the sport has helped him in more ways than one.

“I started wrestling around the third grade, but I took a small break in middle school, so I’ve been wrestling about nine years,” Cambere said. “I was drawn to the sport because both of my older brothers were always so much bigger and stronger than me and always whoopin’ up on me, so I decided enough was enough.

“Now I have both of them begging for mercy any time they try and start with me. Not only that, but both of them are my biggest supporters and their achievements in life and in their sports drive me to be a better wrestler and better man.”

Cambere said cutting weight is his “pre-tournament ritual, plus it lets me appreciate food and water more than most,” and added that he does have one superstition.

“My main thing are the beanies I wear,” Cambere said. “Hot or cold, I always have one on and my tournament beanie is my good luck charm. It’s a worn down American flag beanie that I’ve worn all over the country whatever tournament I may be at.”

Davis said he was pleased with Cambere’s 2019-20 season, and said he is capable of even more this year.

“Luke had a great season last year,” Davis said. “He won a lot of matches, competed in the finals of every tournament, and became a great leader for our team.  I really felt like he was one of the top kids in the state and deserving of standing on the podium at state. A bad draw and a little self-doubt made his state championship results a little anticlimactic.”

Davis said that earning a victory in the state tournament last season will help Cambere more than he probably realizes this season.

“Winning a match at state is priceless in terms of self-confidence,” Davis said. “Luke is best when he is confident and aggressive. He has been to the show twice now, and won a match last season. There is nothing left for him to do but bring home some hardware. Having already been there, his road to state should be easier too. He will be a top seed at all of our events.

“Even though he will need to beat the same people whether he is seeded or not, it is much easier to prepare for a tough match if it is in the finals and not in the first or second round of a tournament.”

Davis said he believes that Cambere is capable of bringing home a state championship in 2021, if he maintains the focus and determination he needs that is so critical to the sport of wrestling.

“If he wrestles the same style at state as he does everywhere else, I believe he will end his season on top of the podium at the state championship,” Davis said.

Cambere said he plans to join the fire academy upon graduation, and while he has received a few offers, he does not intend to wrestle in college.

When he reflects back on his time at Flower Mound, a couple of things stand out that will stay with him forever.

“My friends may have all graduated, but Coach Davis has always been there. And lastly, those gorgeous blue mats. I started my career on those mats and I’ve seen them worn down and bloody.  It’s fitting that it is the same room I graduate on.”