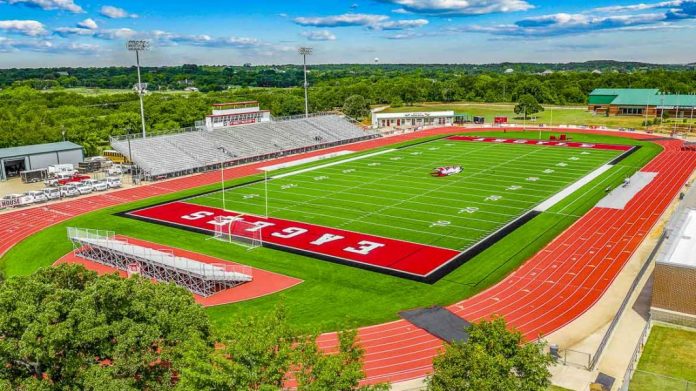 Argyle is headed to the state championship following a 37-20 victory on Friday night over Canyon High School in the state semifinals.

CJ Rogers hit Cash Walker on a 58-yard touchdown pass in the opening minute of the game to give the Eagles a 7-0 lead early on.

After forcing Canyon to punt, Argyle (15-0, 6-0) drove 76-yards and scored on a 28-yard touchdown pass from Rogers to Cole Kirkpatrick.

The Argyle defense then intercepted a pass and Rogers hit Jasper Lott on a 21-yard touchdown pass to make it 21-0 Argyle at the end of one.

Early in the second quarter, Reid Palmer recovered a blocked punt in the end zone for a touchdown to make it 28-0 in favor of the Eagles.

Rogers and Lott hooked up a second time in the third quarter, this time on an 8-yard pass to make it 34-0 Argyle, and Caden Dodson kicked a 21-yard field goal to give the Eagles a 37-0 lead heading into the fourth quarter.

Canyon did rally in the fourth, but it was too late to come back.

Eagles defeat Canyon 37-20 in Class 4A Division I State Semifinal and are headed back to the state championship game for first time since 2015!

The Wildcats advanced to the area round of the playoffs on Saturday afternoon following a 52-24 victory over Coppell in the bi-district round.

The Wildcats made it 14-0 when Byron Phillips broke a 39-yard run with 6:33 to play in the first quarter.

Coppell answered with a field goal, but Guyer came right back and made it 21-3 on a 1-yard run from Phillips.

Michael Mayfield then kicked a 33-yard field goal to make it 24-3 Guyer with 8:12 left to play in the second quarter.

Coppell then scored two unanswered touchdowns to make it 24-17 at the half for Guyer.

The Cowboys actually tied it up less than two minutes into the third quarter, before Guyer regained the lead on a 96-yard drive, capped off by a 7-yard run from Phillips.

Phillips rushed for 209 yards and 3 touchdowns in the game for the Wildcats.

It was then the defense’s turn to get in on the act, as Marquan Pope intercepted a pass and returned it 83 yards for a touchdown to make it 38-24 Guyer, and Tiyon Alridge added a 2-yard touchdown run to make it 45-24 at the end of three.

In the fourth quarter, Ryan Fritcher scored on a 4-yard run to finish out the game for the Wildcats.

Guyer will face Arlington in the area round at 3:15 p.m. on Saturday, Dec. 19 at Globe Life Park in Arlington.

There’s nothing better than the school song with a gold ball in hand! @DentonGuyer_FB is on to the next round with a 52-24 win over Coppell! #txhsfb #ihss pic.twitter.com/6ggHMBbofc

The season came to an end for the undefeated Marcus football team on Saturday afternoon, as the Marauders fell in the bi-district round to Prosper by a score of 38-19.

Marcus was without starting quarterback Garrett Nussmeier (LSU) due to a hand injury.

The Eagles extended their lead to 17-7, but Marcus answered with a touchdown pass to Christian Espinoza from Warren to make it 17-13 and that was the score at halftime.

Prosper scored 14 unanswered points to take a 31-13 lead early in the fourth quarter, before the Marauders drove 75 yards and scored on a 1-yard run from Tyler Gainey.

Prosper would score once more before the game ended.