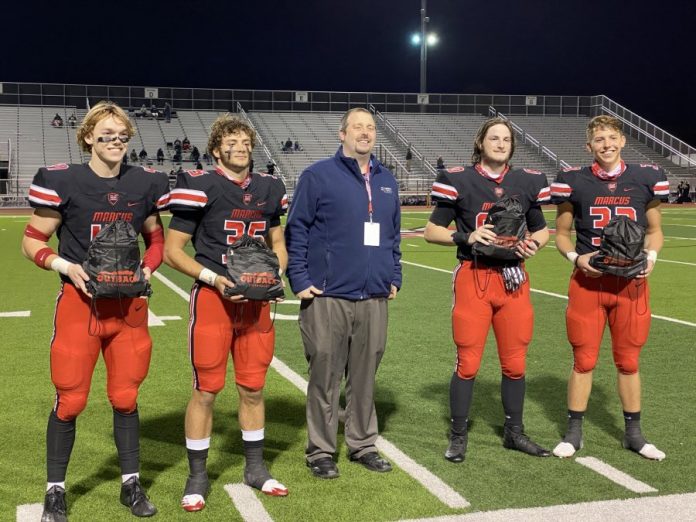 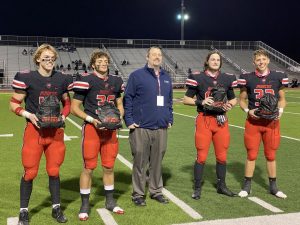 The Marauders had little trouble maintaining their undefeated season on Friday night, defeating Plano East and claiming a district championship.

Marcus (9-0, 6-0) jumped out to a 7-0 lead on an 89-yard interception return from Jude Gibson, and after recovering an East fumble, scored on a 1-yard run from Tyler Gainey.

Plano East answered with a touchdown, but Marcus moved back ahead by 14 when Garrett Nussmeier hit J. Michael Sturdivant on a 13-yard touchdown pass.

The Marauders took a 28-7 lead when Nussmeier connected with Tyler Schott on a 40-yard touchdown pass.

Gabe Espinoza made it 35-7 for Marcus on a 14-yard touchdown run, and following a Plano East score, Marcus drove 96 yards and scored on a 6-yard run from Walker Wells to make it 42-14 at the half.

The defense came up big again in the third quarter, as Christian Espinoza returned an interception 42 yards for a touchdown, and following another Plano East interception, Gabe Espinoza broke a 56-yard touchdown run to make it 56-14.

East scored again to make it 56-21 on their ensuing drive, but Marcus came right back and scored on a 20-yard field goal from John Wegendt.

Nussmeier suffered an injury to his hand and backup Brandon Palmer threw a 41-yard touchdown pass late in the fourth quarter to DeClayton Williams to finish out the game.

UPDATE: @Garrettnuss13 is doing well despite the injury to his left (non-throwing) hand. He is disappointed. But he knows the #UNCOMMON fight in this team — and he knows @MarcusFootball will rise to the challenge.

Marcus will host Prosper in the opening round of the postseason on Dec. 12 at 12 p.m.

.@MarcusFootball caps just the second undefeated regular season in school history and the first since 1995 with a 66-21 dismantling of Plano East.#STCDA #ELITE #UNCOMMON #ProtectTheM #txhsfb pic.twitter.com/XXZ9Yy9ALX

The Eagles took another giant step on Saturday evening, defeating Paris to advance to the state semifinals.

CJ Rogers hit Cole Kirkpatrick on an 83-yard touchdown pass to get things started for the Eagles, giving Argyle (14-0, 6-0) a 7-0 lead early in the first quarter.

In the third quarter, Rogers and Kirpatrick hooked up on a 44-yard touchdown pass to make it 19-0 Argyle.

With 1:54 to play in the third, Rogers scored on a 4-yard keeper, and following a Paris touchdown, the Eagles led 27-7 after three.

Argyle will play Canyon in the state semifinals on Dec. 11 at 7:30 p.m. at Abilene Christian University.

Eagles are headed to the state semifinals after 41-13 victory vs. Paris tonight!

Coppell proved to be too much for the Jaguars on Friday night and pulled away in the second half.

Flower Mound (4-6, 2-5) drew first blood in the game, driving 54 yards and scoring on an 11-yard touchdown pass from Nick Evers to Cade Edlein.

Coppell scored 14 unanswered points to take a 7-point lead before the Jaguars tied it up on a 73-yard pass from Evers to Isaac Carpenter with 9:52 to play in the second quarter.

In the second half, it was almost all Coppell, as the Cowboys scored 23 points to close the game out.

Luke Clayton hit Jack Wells on a 14-yard touchdown pass late in the fourth, but there was not enough time to rally.

Flower Mound will miss the postseason for the first time since 2017.