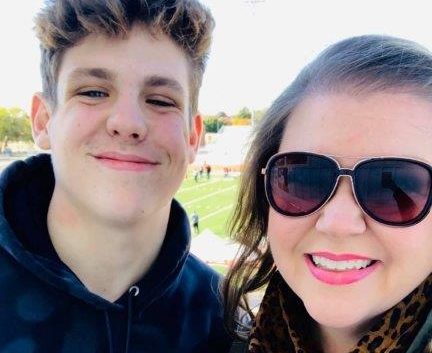 My name is Hunter Parris and I am a senior at Argyle High School. Senior year is a big deal as I have played my last high school football game, attended my last homecoming, and ended my time as president of the Harvest Teen Council.

My experiences in Harvest and on the Harvest Teen Council have been nothing short of amazing. When I first moved to Harvest in August of 2014, I was scared about moving to a new school and a whole different community. I had made some friends through my parents’ friends’ kids, who also lived in Harvest, and these kids became my best friends in the world. I lived on Sunrise, and my two best friends—Brock and Parker—lived on either side of my street. All three of us moved to Harvest at the same time, Brock from Arkansas, and Parker from Georgia. These were kids who were just like me, scared about making new friends and scared about living in a new place. We came together and bonded like we were long lost brothers. We played basketball every single day, rode our bikes around, played football at the field next to the community center, and went into the Farmhouse to get snacks and unsweet tea that Page (Lifestyle Manager of Harvest) would set up every day. We would go to each other’s houses and play 2k blacktop and Madden head to head.

Harvest connected us, and it made a bond that no one could break. Brock moved away in the spring of 2017, and it was very hard for Parker and I. Because of our bond, we have kept in touch and Brock has come back to Harvest to visit. Right after he moved, Parker and I went to the first ever Teen Council Meeting. It was awkward at first, but we became comfortable with new kids in the community. For the next three years, the Harvest Teen Council became such a blessing to me. I was able to donate and contribute in ways that I never thought I could. We started fundraisers and raised thousands of meals for the North Texas Food Bank. Carnivals, back to school bashes, basketball tournaments, you name it, we did it. I was nominated to be the Vice President twice, and then president this past year. Just being able to lead and guide some kids who might have needed that guidance has been such a blessing in my life.

This past January, my term as president expired, as well as my membership to the Council. I could not attend the last meeting, but I sent a video to Page so she could show the entire council. I started talking about all of the blessings that came with the Harvest Teen Council and everything Page had done for me individually, and I got choked up. I had realized it was finally over, and I realized that a very good thing for me had come to an end, as all good things in life must come to an end.