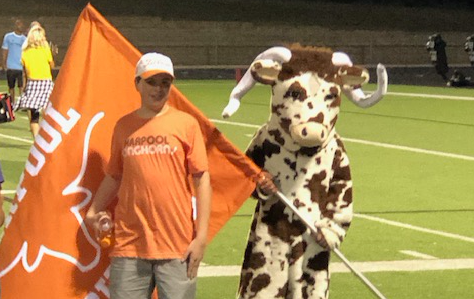 A local boy with Down Syndrome is taking the job of school mascot by its longhorns.

At Harpool Middle School in Lantana, the sports teams are called the Longhorns, but they’d never had a mascot, a student dressed as a longhorn on the sidelines, rallying the crowd. When conversations started last year about potentially adding one, many teachers were separately suggesting one boy they thought would be perfect for the job: Nicholas Cook, who is now 13 and in eighth grade.

“He has an infectious spirit. That’s why so many teachers thought of him for it,” said Linda Cook, Nicholas’ mother. “They found a spot for him. I thought it was absolutely wonderful.”

Linda got a call from Nicholas’ special education teacher, and then she told him the school wanted him to be its first mascot.

“When we first told him, he couldn’t believe it,” Linda said. “He was like, ‘Me? The mascot?’ He was smiling from ear to ear.”

Nicholas attends cheerleading practice every week, pumps up the crowd at pep rallies and spreads joy on the football sidelines at every game.

“Game days are the highlight of his week,” Linda said. “He loves doing his thing, being sort of goofy and getting the crowd going. He’s out there, all about enjoying life and being in the moment.”

Linda said she has greatly appreciated all the support her son has received from the students, faculty and community around Harpool. Nicholas was presented a football helmet at this week’s playoff game at Lake Dallas High School.

“The community has embraced Nicholas, despite his differences,” she said. “They’ve accepted him for him. The kids have all been so kind to him.”

Nicholas has a special bond with Cole Tisdale, a student who helps him get in and out of the longhorn costume and during the games.

“Cole is very gracious with helping him,” Linda said. “He’s destined to do great things, he’s an excellent role model.”

Linda said after football season, Nicholas will be looking forward to donning the longhorn suit again for basketball season.

“It’s his thing he can be proud of and participate in,” Linda said. “He’s having lots of fun.”