In the aftermath of a violent mass shooting that killed 17 people at a south Florida high school last week, politicians, the media and people across the country are discussing how to reduce the number of school shootings and the number of fatalities in those shootings.

Some advocate for making the sale of assault rifles illegal, while other, less drastic ideas include raising the age limit to buy firearms, intensifying background checks and reducing magazine size.

Some, including President Donald Trump, are in favor of arming teachers, so that there are more good guys with a gun who could stop a shooter before police arrive. The idea has its opponents, but Argyle ISD Police Chief Paul Cairney believes it can work in other school districts, because it is working in Argyle.

After the Sandy Hook shooting in December 2012 — when a shooter killed 20 young children and six adults at Sandy Hook Elementary School — the Argyle ISD Board of Trustees voted to arm district staff and officials and the school district police department was formed before the 2013-14 school year started. Signs were erected at each Argyle ISD campus announcing the potential presence of armed school personnel.

The system works, Cairney said, because of several important details that often get left out when the idea of arming teachers is discussed.

No staff members are forced or pressured into carrying a firearm in school; they must volunteer and then they must go through an intense selection process, psychological evaluations and extensive training, including a simulation of an active shooter situation. 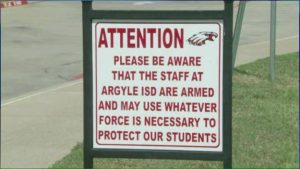 “The training takes you to a high-level of skill in a short amount of time,” Cairney said.

He added that they must have or obtain a concealed-carry license and, if they complete the training and are approved to be armed at school, they must continue organized training to keep their skills sharp.

All of this ensures that the people with firearms are highly-motivated to take on this additional responsibility; and, that they are highly skilled in handling a firearm. But, there is still more to the school district’s plan.

“You can ask around, you can try to stereotype about who the armed staff are,” Cairney said. “You’ll never figure it out.”

Having an unknown number of highly-trained armed staff is a strong deterrent for would-be school shooters, he added.

“These people [school shooters] want to cause as much damage and pain and death as they can,” Cairney said. “This is not a good place for them to try it, because we have people who can return fire in seconds. They [school shooters] wouldn’t have much success here.”

There haven’t been any active shooters at an Argyle ISD campus and the district is confident its security system will deter them. Cairney believes having armed-staff gives parents and students peace of mind.

While most schools don’t allow guns on campus, there are other school districts in Texas and across the country that have instituted a similar program, and Cairney said he receives calls from around the country from schools, businesses and others who want to learn more about how Argyle ISD’s program works.

“I think it could work in other schools,” Cairney said. “We want to offer it as a solution to others and we want to support them.”

He added that after so many school shootings, he believes something needs to change in the way most schools are kept secure.

“It needs to be taken seriously and proactive steps need to be taken to prevent a shooting before it happens,” Cairney said. “After Sandy Hook happened, one of our board members said he was not prepared to go to 20 funerals of our students; so, they took positive action then, before something happened.”