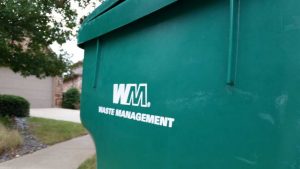 Lantana officials are close to making a decision on which trash and recycling service to use going forward.

In response to service issues over the better part of a year from Waste Management, the two Lantana Fresh Water Supply District (FWSD) boards are considering switching to Republic Services.

The boards met on January 18 to hear a formal presentation from Republic and discuss ongoing contract negotiations with Waste Management.

Republic is the second largest waste company in the nation, behind Waste Management, and provide service to the nearby towns of Argyle, Copper Canyon, Coppell, Roanoke, and the Harvest community.

Waste Management currently serves Flower Mound, Double Oak, and Lewisville, among others, although Flower Mound has asked for bids from Republic and other providers.

“In the event that we do have a truck that goes down, it’s always good to go with a company that’s got a truck available in the area,” said Jeri Harwell, Municipal Services Manager at Republic.

Republic officials first proposed that Lantana’s collection routes be split in half, along Lantana Trail, with three separate pickups—two for trash and one for recycling– on each side of the community per week. That would result in trash trucks being in Lantana five days a week.  An option not popular with some board members.

“I don’t like the idea of trucks in Lantana five days a week and cans out for three days in each neighborhood,” said FWSD #7 board member Randy Fogle.

Since the meeting, Republic tweaked their proposal and will present a new plan that calls for a more unified approach to collection, similar to the current contract with Waste Management. The revised plan is to collect trash on Tuesday and Friday, and recycling on Thursday, for all of Lantana.

Reid Donaldson, ‎Senior Area Municipal Manager at Republic, said that Republic has built a collection facility across the street from Waste Management’s location in Lewisville next to Camelot Landfill and it is outside the flood plain.

Waste Management was hindered by flooding that closed their Lewisville facility at the landfill last May.

Even after the floodwaters receded, Lantana residents complained of sporadic late or missed garbage and recycling collection through the remainder of the year. Waste Management finally responded by adding a fourth truck in January.

“We were assured that these issues would be corrected, and we were also told that we would be receiving performance updates. Performance didn’t improve and the reporting that they said they would provide us was simply a listing of missed calls that they received by telephone. They simply can’t or won’t produce anything that will build confidence in terms of what they’re doing to fix their systems,” said David Ware, FWSD #7 board president.

Lantana has been serviced by Waste Management since the development’s inception in 2001.

After several months of negotiations, FWSD board members in July 2015 voted to approve renewing Waste Management’s agreement for five years effective Jan. 1. 2016 with performance standards and penalties added in, but the new agreement has yet to be signed. The legal department at Waste Management and the FWSD’s attorney are reviewing the terms of the proposed contract.

The new proposed agreement includes a 7-percent increase during the first year– which equates to $1.07 more per household per month– with subsequent yearly increases based on the Consumer Price Index (CPI).

In the meantime, the boards agreed last fall to extend the current contract for three months until March 31, 2016 to give Waste Management time to work out their performance issues.

Lantana residents currently pay $19 per month for garbage and recycling services. Donaldson told the board that Republic’s rate would be similar to Waste Management’s rate.

The two FWSD boards are expected to vote on which company to go with at a special joint meeting this Thursday, February 4, at 6 p.m. at the Lantana District Office in Bartonville Town Center. Representatives from Waste Management and Republic will be at the meeting. The public is encouraged to attend.