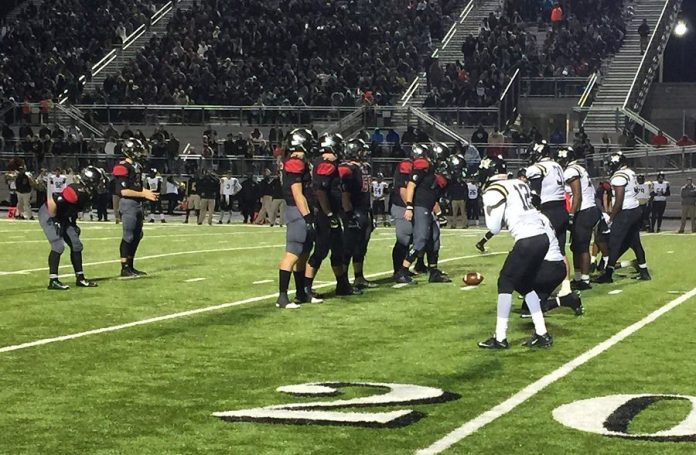 The most commonly known motto for winning football games is “Defense Wins Championships,” and Argyle’s defense was a main reason they defeated Pittsburg on Friday night by a score of 59-34, catapulting them into the third round of the postseason.

Argyle had a fantastic start on defense, as on the second play from scrimmage Pittsburg QB Brian Baca’s pass was tipped and intercepted. The Eagles took advantage, as RB Taylor Sweatt found the endzone from a yard out for a quick 7-0 lead.

The nightmare continued for the Pirates (10-2), as on their very next play, RB Tray Walker fumbled on his first carry. They were able to survive without too much damage, as Argyle could only come away with a field goal.

It almost looked like it was getting worse, as the Pittsburg punter botched a punt, but Sweatt fumbled two plays later. However, Pittsburg once again couldn’t move the ball, and they were forced to punt. Argyle found the endzone again by way of Sweatt, and the score became 17-0 still in the first quarter.

The Eagles kept rolling, building a 38-7 halftime lead, but the Pirate offense was showing flashes that could get them back in the game. They showed that instantly in the second half, getting an onside kick, and Baca scored on a QB keeper to make it 38-14. The Eagles didn’t back down, and WR Drew Estrada scored on a short run to bring the lead back up.

“When they started making plays in the second half, we all just had to refocus and start playing like we did in the first half,” Sweatt said following the game. “A win like this continues to build our confidence and lead us into a great week of practice leading up to a game against a very good team.”

Pittsburg would continue scoring to claw back into the game, but a Gage Campbell pick-six iced the game, sending them into the third round with a big showdown against Kennedale. Argyle defeated Kennedale last year in a thriller that went down to the wire, with the Eagles winning 52-48.

.@argylesports defeat Pittsburg 59-34 and will advance to the next round of playoffs! @dctf #txhsfb pic.twitter.com/U3snS2Bl3F