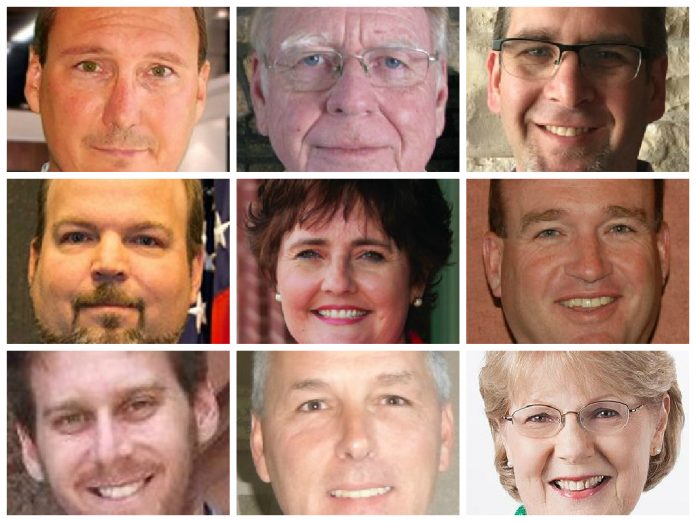 Voters headed to the polls Saturday in southern Denton County to determine the outcome of several municipal and school board races. Here are the results:

Flower Mound:
With a mandate from voters to slow down commercial and residential development in Flower Mound, three newcomers were swept into office on Saturday night.

Brian Rountree topped incumbent Michael Walker for the Place 1 seat on Town Council with 55 percent of the vote (1,825 to 1,483).

“I am honored and touched by this opportunity. I have the greatest volunteers in the world that supported me and my campaign. I love Flower Mound and am looking forward to a great future,” said Bryant.

Gelbman said via Facebook he was thankful for the victory and glad the election was over. “To the voters of Flower Mound, I am so grateful that you have choose me to represent you in our town council, it will be a great honor to serve my community in this manner. To Ms. Kyer, it’s been a very long eight weeks and to be honest I’m glad the campaigning is over. I commend you on all your hard work and I appreciate all you have done and all that you will continue to do for the residents of Flower Mound.”

Rountree said Saturday night he was not ready to comment on his victory but stated in his Meet the Candidates submission to The Cross Timbers Gazettethat he would hold a hardline on new development: “I oppose high density development in Flower Mound, especially when it is going to severely increase traffic congestion along FM 2499. Unlike our current leadership, I will vote against Master Plan zoning changes that ignore SMARTGrowth standards. I will add balance to a Council that is currently approving almost every development that is put before them and raise the bar back to where Flower Mound citizens expect it to be. I will speak truthfully, forcefully and always put the concerns of existing citizens ahead of the desires of new developers coming to Town.”

Place 1 council member Mike Walker said that he was disappointed with the outcome but wishes the three new council members well: “I am disappointed in the election results, but this is the democratic process. Our Town has a long history of cyclical changes of voter sentiment.  I want to extend my sincere thanks to all those who supported me during this campaign. I have enjoyed meeting and working with our residents during my term on Town Council and my time on our other boards and commissions. My intent has always been to contribute in a positive manner for the benefit of our Town. I hope I have met that challenge. I wish success to the new Town Council members as they begin their elected service – Brian Rountree, Kevin Bryant and Itamar Gelbman.”

In Place 2, incumbent and current board president Trisha Sheffield won 77 percent of the vote over Roger Myers, who submitted notification that he did not intend to run after the deadline to be removed from the ballot.

Keith White and Jeff Day were the top two vote-getters in a six candidate race for two at-large seats on the Argyle ISD Board of Trustees with 216 and 202 votes respectively. Neither board president Eric Fields or vice president Spencer Jefferies filed for re-election.

Clay Sams, who was appointed to the Place 3 seat in 2014, easy fended off former mayor and council member Ron Robertson with 71 percent of the vote (290-118).

No one filed to run against Jim Langford, currently mayor pro tem, in Place 5.

Former council member Dave Svatik won 78 percent of the vote over Charlie Nicholas in Place 4. Nicholas decided to withdraw after Denton County had printed off the ballots.

Sue Tejml is also unopposed and will serve another term as mayor.

Kathleen Wazny won an impressive 69 percent of the vote over Amber Briggle (1,255 to 560) in the City of Denton Town Council District 3 race.