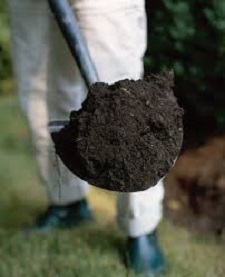 Quick!  How many soil types exist within the boundaries of the great state of Texas?  You win the jackpot if you said 1,411.  That was at last count, anyway.

Weather, live plants and animals break up local bedrock deposits and organic matter to produce soil, the stuff in which gardens thrive or fail.  Out in far west Texas where there are few plants, animals and little water, the soil is top heavy with minerals and air, but light on organic matter and water.  The situation is just the opposite deep in the Caddo Lake swamplands.

Half of ideally fertile native soil consists of equal portions of broken down rock and decomposing plants and animals.  The other half of that ideal dirt pile is equal parts of air, water, microbes and macrobes (live bugs and worms) in the empty spaces.

Compare decomposition of organic materials to a fire.  Add air to raise the temperature and speed up decomposition, or splash on water to cool down or slow the process.  There’s a reason we say life burns up in the desert and drowns in the swamp.

In Texas decomposable matter, organic stuff, runs anywhere from .5% to a full 5% of soil volume.  Paragraph 3 above says that needs to be about 25%.  Unless you’ve purchased a plot in The Garden of Eden, more than likely you’ll need to tinker with the decomposition fuel for the fire in your plot of earth in order to grow happy plants.

The bad news is there is no one-size-fits-all formula for fertile soil because the amount of minerals, organic matter, air, water and animal life in a cubic foot of local ground depends on (a) available fuel – what has already lived and died there, (b) the speed of that fuel’s decomposition which is affected by cultivation which adds air to the soil, (c) rainfall, and (d) drainage.  Remember: air, composed of warm gases, and water, semi-solid cooled gases cannot occupy the same space.  Ask any drowning man.

American pioneers cleared forests and plains to find virgin soils high in organic matter after who knows how many uncultivated centuries.  Much of North America is blessed with plentiful rainfall and good drainage so the place was, and in many ways still is, a farmer’s dream come true.

Where cotton reigned as king of crops, planters grew until they exhausted the supply of topsoil then moved west.  The vast southern swath of arable land mostly petered out around the DFW area.

With the breakup of cotton plantations sharecroppers eked life out of smaller plots, and later with the aid of synthetic fertilizers squeezed the remaining life from tired local ground.

If you’ve ever seen the plant size and produce volumes that emerge from ideally fertile earth, you understand the cure for a problem local garden is probably soil reclamation.

The good news for backyard gardeners is we can start small.  By small means are great things brought to pass, so bring on the compost in the amount of a 40-pound bag for each square foot of new planting space.  Active beds lose about 3” of depth in a season, so regularly replacing lost soil is a gardener’s most important chore.