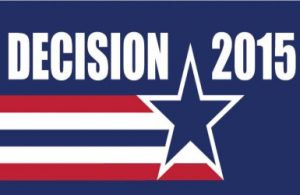 The election slate for Bartonville Town Council has two former council members vying to make a return in May.

Both Traylor and Sams have filed for re-election to their seats on the town council.

Robertson served on the town council for 13 years, 11 1/2 as mayor, before resigning from his mayoral seat in November 2013 at a meeting following a special election.

When Jeff Traylor and Gary Marco were sworn in, following the executive session of the Nov. 19 regular town council meeting, Mayor Pro Tem Jim Farrell and Mayor Robertson turned in their resignations.

“At first, during the executive session, it seemed like we could move forward and all work together,” Robertson said at the time. “Then, once we went into the open session the dialogue changed and it was clear there was no middle ground. It was all about a group of people who don’t have the same feelings I do for Bartonville, with different values and who want to take the town in a different direction. They have a set agenda, period. So, after Jim Farrell resigned I just gave it up. I can’t be part of stupid.”

Robertson, who owns Robertson Pools, Inc., said Tuesday he was tossing his name into the mix to bring his 22 years of council experience in Coppell and Bartonville back to the town council.

Traylor, who is self employed, said he will continue to pursue the same goals of keeping Bartonville rural, reducing or eliminating commercial growth and fixing roads.

“The citizens are not looking in favor of the great wall of Kroger,” Traylor said Tuesday. Kroger is the main anchor of the Lantana Town Center currently under construction on FM 407. The shopping center sits on the border of Lantana and Bartonville.

Robertson spoke of the current council’s attempts to strip out rural business, settling a lawsuit on the water tower which he says allows contract zoning and trying to fix roads without having the necessary resources to pay for it.

“You have to have commercial development” to pay for the roads, he said, adding that simply raising taxes will not do it. A penny, Robertson said, doesn’t generate enough revenue in Bartonville to cover the costs of fixing roads. “They don’t get it.”

Traylor, a resident of Bartonville for 22 years, said the current council is dealing with a deficit in road maintenance created over the last few years.

Voters will have a choice between the former town council and the current town council, Traylor said. “I think it’s a very clear choice for voters.”

Foringer said he decided to seek a return to the council after urging from several friends. “I made the decision today,” he said Tuesday shortly after filing the paperwork at Bartonville Town Hall.

Retired from a 35-year career as a pilot, Foringer served on the council for more than a decade in the late 1980s and throughout the 1990s, acting in the capacity of mayor when former mayor Kathy Carrington left the town council, records show.

Foringer said keeping the rural feel of Bartonville is important to him. “I want the town to remain as it is,” he said, adding that the Bartonville Town Center expansion and the Kroger shopping center should serve as enough commercial for the community. In addition, keeping lot sizes to a 2-acre minimum per housing unit is another key concern he would like to see remain in place.

Sams was elected to fill the unexpired term in Place 3 in a special election in November. The 30-year Bartonville resident has said one of his first priorities would be to try to make residents feel more a part of the government process and to repair the divisiveness among residents,

Sams retired in 2005 from his position as the southwest regional operations manager with Mohawk Industries. He graduated from the U.S. Institute of Technology as a material facilities specialist.

“I feel good about the direction the city is going,” Sams said, adding he believes in listening to what residents want for their community. “I always want what’s best for the community.”

Before moving to Bartonville 15 years ago, Robertson lived in nearby Coppell where he served on the city council for nine years as mayor pro tem and council member. It is the combined service on councils in both communities that he believes sets him apart. “I know the government code,” he added. “I will continue to challenge the moves that are being made. They are wrong.”