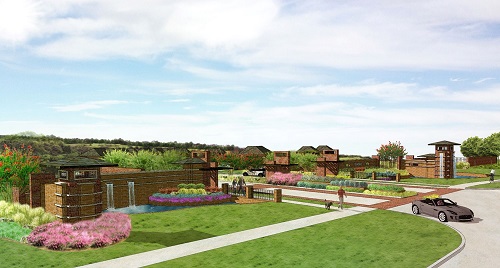 Officials unanimously approved an amendment to the master plan allowing a change to Denton Creek District with high density residential use from the previous campus industrial use designation. The council also approved rezoning the project from interim holding district to Planned Development District No. 136 with Single-Family District-5.

The initial proposal called for 320 single family homes and had more of the smaller-sized lots.

Changes to the proposal include 10 fewer homes with 32 fewer 6,000-square-foot lots and 22 more of the larger 7,440-square-foot lots. Small pocket parks were added throughout the development. Council members were told that at least 96 percent of the homes would be contiguous to open space- an element brought up by council members in a review of the project in January.

“That’s what’s kind of unique about this,” Mayor Tom Hayden said, referring to the high percentage of open space. Hayden said the fact that most homes would open up to green space was different than other developments.

The project also includes a trail along the bank of the creek as well as the park amenities ranging from playing fields to shaded areas to park benches and playground structures.

“I think the proposal exceeds what is expected in the town,” Michael Walker said. “This is complimentary to Canyon Falls.”

“If this is approved, you’re basically swapping houses with warehouses at a main thoroughfare,” Hayden said to council members. He also referenced comments about SmartGrowth, indicating the council always considered SmartGrowth with projects being proposed.

Oscar Trevino, who owns a construction company next door off Hwy 377, had expressed concerns the first time the project was proposed but said his concerns were addressed by the developer.

“They have been very professional,” Trevino said of the developers.

“Thank you very much for listening and incorporating a lot of what we proposed last time,” Councilmember Bryan Webb said, agreeing. “I think it’s going to make it more livable for the people who call that home.”