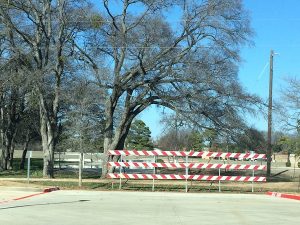 Flower Mound Town Council members tabled action Monday on plans to acquire a half-acre property through eminent domain after the issue flared on social media over the weekend, prompting residents to decry using condemnation to take private property from a longtime resident for what was perceived as business use.

Councilmembers unanimously agreed to allow town officials to discuss options with the landowner, setting a timetable of April 20 for a compromise before officials again consider eminent domain.

The issue erupted after a consent agenda item appeared on the agenda seeking eminent domain relating to property on Bob White Lane owned by Janvier Gentry-Scott, whose family has lived in Flower Mound for 50 years. About .585 of an acre was being sought by the town to use in creating a north/south connection for businesses between Firewheel and Sagebrush where traffic could move among businesses to gain access to traffic lights on both streets onto FM 2499.

Gentry-Scott questioned why town officials needed to use eminent domain to take her property for business use. That question spurred more than 400 comments on Facebook on the use of eminent domain.

Town officials countered that negotiations had been ongoing since August but to no resolution. Doug Powell, executive director of development services for the Town of Flower Mound, said the north/south connector off of FM 2499 behind the businesses had been part of an overall Specific Plan Area put into the master plan in 1994.

Town Manager Jimmy Stathatos said the town had offered Gentry-Scott an estimated $238,000 for the property, which equated to about $9 per square foot. He also said the town has never sought eminent domain for private business but for public use issues. “We’re not trying to bring the Cowboys to town,” he said of their plan to use the property to create access and maintain drivers’ safety onto FM 2499. “It’s not like the town has done anything wrong. Everything has been done legally.”

Stathatos said the town has had 48 condemnation cases in 15 years with only two on the consent agenda – one in October and the one on Monday. Generally, such real estate discussions are part of closed sessions, which are allowed by law.

Gentry-Scott said she never made a counter offer. “I did not ever offer a counter offer for more money,” she said. “I was considering offering an easement.”

Her mother, Sharon Gentry, said she recalled discussions about the master plan in 1994 because she served on the master plan committee at the time. At the end of the master plan discussions, Gentry said a “councilman showed up and said, ‘I’ve got an idea. Let’s have a spine road go through from Firewheel and have it hook up with Sagebrush.’

“The next week, the council voted on it and it was passed,” she said.

Both said they didn’t realize until Monday that their access to FM 2499 could be affected.

Several residents spoke out in favor of Gentry-Scott, asking town officials to remove the item from a consent agenda and table it indefinitely.

Some cited concerns about the use of eminent domain while others decried the effect of removing two specimen trees if the council approved the measure.

“We’re losing trees,” said Linda Martin. “There’s got to be a place where businesses can go where there’s not residents.”

“Whether you realize it or not, this is a very symbolic battle,” Rountree said. “This is a battle about the heart of Flower Mound.”

Councilmember Bryan Webb said he spent time before the meeting to read the more than 400 comments on social media. “I’m getting the gist,” he said of the concerns. Webb added that he thought it spoke well of the town that someone recognized potential issues 21 years ago and created a plan to address traffic on FM 2499.

“For me, it’s the safety issue that drives it. “We should figure out a way to come to terms with the Gentrys to make it happen. I’m happy to discuss this but I don’t want to kick it down the road for another two years.”

Mayor Tom Hayden asked Gentry-Scott if she’d be willing to meet with town officials about a possible compromise.

“I appreciate the opportunity to negotiate with you in good faith,” she said.

0 0 0 0 0
Previous : When Does It End?
Next : Highland Village hires second assistant fire chief