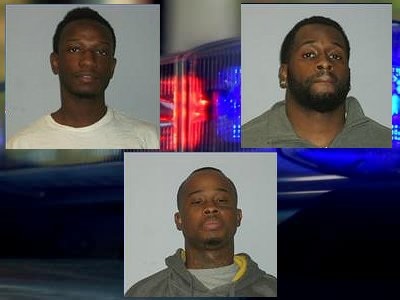 A recent electronics theft can serve as a heads up to local business owners as well as residents who buy electronics online from individuals they do not know, Flower Mound police say.

“Obviously, you don’t know if the items are stolen or not,” said Flower Mound Police Officer Paul Boon on items posted online for sale by unknown individuals.

It was employees’ alertness at the Game Stop at 6161 Long Prairie Road that tipped Flower Mound police to three men who were later caught with an estimated $2,171 worth of stolen electronics last week.

“These guys tried to take stuff from Game Stop but because the employees were alert, they didn’t get anything,” Boon said, adding the suspects tried to break into a cabinet but were stopped by employees.

After the suspects quickly left the store empty-handed, the employees called police, telling them the trio headed toward the AT&T Mobility store in the same shopping center on FM 2499.

When police followed the trail, they were able to pull still shots from the AT&T cameras and get a good description of the suspects’ vehicle from witnesses, Boon said. The men also asked a store clerk where the nearest Best Buy was located and were told it was across the street, according to police.

Another officer, on the lookout, spotted a black Nissan Altima matching the description just a few doors down shortly after the original report was called in and found three men matching the photo stills in possession of the stolen electronics.

Three men were charged with engaging in organized criminal activity in connection with the thefts.

Pratt, Absalom Jones and Alzorey Jones all posted bond and were released from the Denton County Jail the following day. A search of Alzorey Jones’ bond records in Denton County showed an extensive history for charges of theft, robbery and aggravated assault with a deadly weapon spanning from 2007-2008.