New business, construction, traffic part of area’s past and future 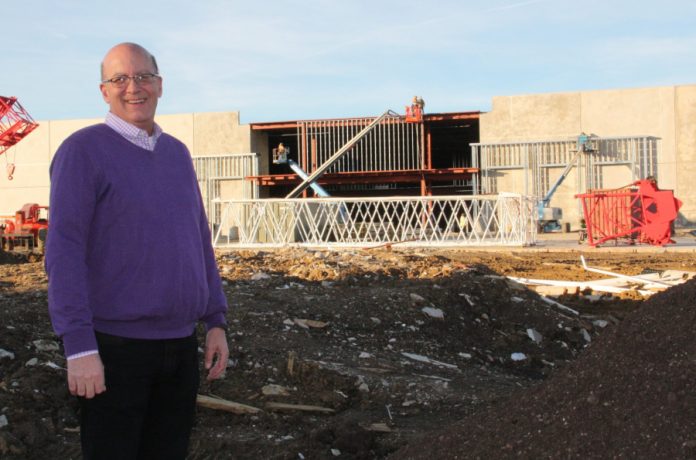 Economic Development was key in southern Denton County as new restaurants opened and work continued on the River Walk and Lakeside DFW – two major developments expected to take Flower Mound to a new level of tourism and quality of life for area residents.

The year ended with an announcement of Flower Mound’s first hotel and construction of an ongoing slate of new eateries as well as a movie house at major developments and shopping centers.

“Without question, it is the economic vitality that our town is experiencing; new employers moving to town, new business and restaurants opening, and more are on the way,” noted Flower Mound council member Bryan Webb of the town’s accomplishments in 2014 and the expectations for 2015. “The expanded tax base gave the council the opportunity to lower property tax rates for all residents while continuing to provide exceptional services that we all expect.”

For neighboring communities, new businesses from Whole Foods and DATCU in Highland Village to the new Kroger off FM 407 in Bartonville/Lantana were signs of growth continuing to bring convenience and choices to an ever-expanding consumer market.

Across Denton County, and in particular southern Denton County, traffic tie-ups and time spent commuting to and from work continue to pose concerns for residents. Some roads were completed while others will be widened well into 2015 and beyond.

“Denton County, in partnership with TxDOT, made improvements to our road infrastructure in 2014. Completion of 407, 114, and the beginning of construction along 35E, 2499 at the DFW Connector, and 1171, are all milestone improvements that improve the quality of life here in Denton County,” noted Denton County Commissioner Andy Eads.

In Bartonville, town officials plan to accelerate their street revitalization program. “Our rural country vistas are a bragging point and we want to improve our roads to make travelling our countryside as peaceful as the view,” noted Bartonville Mayor Bill Scherer.

Meanwhile, Argyle is looking to streamline their Comprehensive Plan with series of meetings this month. The open house format will allow residents input into how the community is developed as growth continues to surround it.

The Town of Argyle is also started the new year with new Town Manager Paul Frederiksen, who is bringing more than 20 years of experience in working with municipalities. He recently worked as vice president of operations for the Las Colinas Association, which serves as the permanent property owner’s association for the development of 12,000 acres in an area which has seen significant economic development growth.

With Argyle in the path of growth in southwest Denton County, Frederiksen has said he will be working with the town council and residents to ensure that the community maintain its rural feel while dealing with the inevitable growth around it.

For the coming year, Eads indicated some announcements would be coming on major employers to bring more opportunities for residents seeking work closer to home and diversifying the county’s tax base.

“I anticipate continued economic development with the opening of Nebraska furniture later this spring in The Colony. This is an example of Denton County working with our cities to attract major employers to our county. I also anticipate the public announcement of several corporate relocations to Denton County in 2015,” Eads said.

In Highland Village, the development of Doubletree Ranch Park and the connections of the community’s hike and bike trails are among the quality of life projects town officials are most excited about.

“Doubletree Ranch Park is under construction and we look forward to the opening in 2015 for the entire city and surrounding areas to enjoy for many years to come,” noted Highland Village Mayor Charlotte Wilcox.

“This will allow our residents to safely access either side while enjoying the trail system,” Wilcox noted. In addition to Doubletree, officials are looking forward to the addition of Lakeside Community Park off Highland Village Road. The park will have a walking trail, gazebo and views overlooking Lake Lewisville.

Keeping up with ever-changing technology and public safety continues to be a goal for both communities and the county. In 2014, the Denton County saw the opening of a new jail with 384 beds, a juvenile detention center and the new Sheriff’s Office Firearms Training Center. In 2015, the Denton County Sheriff’s Office will see the completion and implementation of state-of-the-art, four-site P25 Phase II Digital public safety radio.

“This system will service over 30 local police, fire and EMS departments as well as a number of state agencies,” noted Denton County Sheriff Will Travis.

Scherer highlighted the efforts of town officials to keep residents informed via email updates and quarter updates via the mail as well as revitalizing the town’s website. The efforts by town staff were recently recognized with the Texas Municipal League’s 2014 Excellence Award.

“I am very proud at how the overall town communications has improved,” Scherer noted.