The city of Lewisville on Friday held a groundbreaking ceremony for its future Tittle McFadden Public Safety Center.

Construction on the state-of-the-art 116,000-square-foot complex is expected to be completed by late 2024 at the corner of Main Street and Valley Parkway to replace Lewisville’s aging police and fire facilities. In addition to police and fire operations, the facility also will include a hardened emergency operations center and roughly 20,000 square feet of shared space for a fitness room, training and meeting spaces and storage, according to a news release from the city of Lewisville. 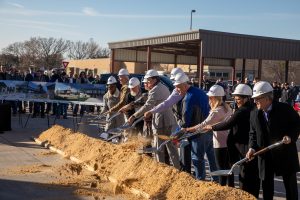 In November 2021, Lewisville voters approved a $95 million bond package to fund construction of the facility. An additional $5 million will come from bond proceeds from 2015 that are restricted to public safety purposes, according to the city.

In September 2022, the Lewisville City Council unanimously approved a resolution to name the new facility for former Lewisville Fire Chief Tim Tittle and former Lewisville Police Chief Steve McFadden, in honor of their many years of public service to residents, police and fire personnel and the city. Tittle served in the Lewisville Fire Department for more than 40 years, becoming chief in 2011. He died after a long battle with cancer in 2020. McFadden served as chief of police for 29 years before retiring in 2007.

Over the weekend, Lewisville Fire Administration and the Fire Marshal’s Office relocated to 1955 Lakeway Drive, Suite 230, and Fire Station 1 relocated to 1150 McGee Lane. The relocations are temporary until the new public safety center is complete.