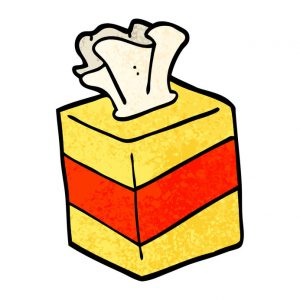 To take my mind off the daily news
I’ve decided to write an honest review
Of something light in every home
It’s that on which your nose is blown.

This is an item used day in and out.
Its importance in life there is no doubt.
When flu time symptoms darken your door
You’ll use a hundred tissues or more.

The problem with the box that they come in
Is their distribution will make you cringe.
Every box that comes from the store
Lets you pluck out a few then won’t release anymore.

The way the tissues are rolled inside
After a few they no longer glide.
So you tug at the clump with no place to begin
Loosening a handful much to your chagrin.

This flaw in the design makes the tissues go fast.
That’s because the makers don’t want them to last.
Sooner than later replacements you buy
And now I have told you the how and the why.

The product itself is versatile indeed.
Like to stuff up your nose in case it should bleed.
And should a dead bug appear on the floor,
To scoop it right up takes one and no more.

A mishap while shaving can let out some blood
Which when tissue is added turns in to mud.
When sweat pops up just above your brow
Dabbing with tissues is the ticket and how!

If your glasses are dirty and need to be cleaned,
You can massage them with tissues until they’re pristine.
Do make sure the tissues aren’t treated with lotion
Or your vision will seem like you’re under the ocean.

A little known fact regarding entertainment and tissues
Is one, that before I got wise, I used to take issue.
The grandkids are always looking for something to do
So I’ve learned to keep tissue boxes out of their view.

Oh what a joy to pull and to wriggle
Each single tissue while they laugh and they giggle!
They’re never deterred by a clump in the middle.
They grab and they twist and they tug and they wiggle.

Tissues go flying all over the room.
The best way to clean up is using a broom.
Sometimes I think I should really apply
The broom to the pants of all three small fries!

As for the tissue there’s more to disclose
Having many more uses not just for your nose.
This is still better than hearing all the media bunk
With all the bad vibes to bring on a funk.

And even at that with a tear on your cheek
You’ll wipe at that droplet while a tissue you seek.

That’s about all on this subject I’ve got…
Or maybe it isn’t…maybe itsnot!