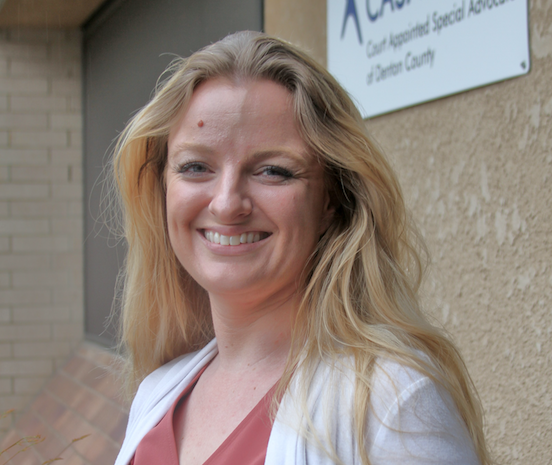 Court Appointed Special Advocates for Children of Denton County announced this month that it has named its new executive director.

Following the recent departure of Sherri Gideon, the agency’s new executive director is Rebecca Cox, who has more than 15 years of experience in nonprofit administration, according to a CASA news release.

Cox, of Aubrey, is a graduate of the University of North Texas and the University of Texas at Arlington, holding two master’s degrees in Social Work and Public Administration with a focus on nonprofit management. Cox’s most recent position was the Vice President of Metro Dallas Homeless Alliance, where she built collaborations between over 40 community programs to provide homes to homeless individuals, families, and unaccompanied youth.

As director, Cox is responsible for leading CASA in its mission to provide trained community volunteers to advocate for the best interests of abused and neglected children and promote community awareness about child abuse issues, the news release said. Her appointment comes at an optimal time for CASA because April is Child Abuse Awareness month with many awareness activities planned, including the upcoming March Against Child Abuse on April 5 as well as the largest fundraiser for CASA, Pulling for Kids, taking place on May 11.

“CASA is primed for growth and we are excited to have Rebecca join us and lead us to the next level. We know that she will be able to see us reach our vision of every child in Denton County in a safe, loving and permanent home” said Paula Wagner, CASA Board Member.

CASA of Denton County is hosting an open house meet and greet on April 12 from 4:30 to 6:30 at the CASA office, 614 North Bell Ave., Denton, to introduce Rebecca Cox as well as share information about the CASA mission.

For additional information about CASA of Denton County and to engage in the CASA mission, click here or call 940-243-2272.