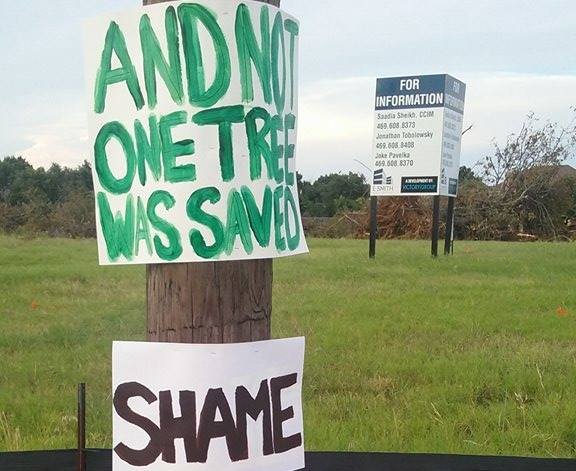 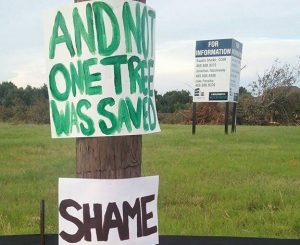 I have been a member of the Flower Mound community for over 35 years. When my family moved here we thought that we were moving to a well designed community (which it was by Marcus of Neiman-Marcus fame).

Marcus and his planners developed a new town plan that would allow for growth, but in a way that the beautiful, huge oak trees and the greenbelts would be kept.

There were to be greenbelts along the roadsides and nice parks in all the living areas. There were to be walking paths. The town was to be spectacular, different, and a place in which families could live in beauty and comfort. Yes, as I read in the “You Said It” portion of the Gazette, I am a voter who wanted (although it is too late now) as the person put it … a “keep Flower Mound a hick town, cow town” person. I do not consider what is being done and what has been done to this once beautiful community as keeping it a hick, cow town.

You see as a proud Texan, I was reared with a little space between my house and my neighbor’s house. I grew up being taught the beauty of trees, birds and other things of nature. I did not come from a part of the United States where everything had to be slammed together, where concrete replaced green areas, where shopping centers were built on the side of the road with little greenery, where apartments (which were not supposed to be in this community) were built right on the curb of the street.

Where a river walk is being built by first cutting down all the huge trees to be replaced by twigs (maybe), and where people expect the area where I live to be changed to look like the area from where they came. I realize that all that has happened in Flower Mound has been done in the name of more money and more money, not for the good of the people who moved here to have a beautiful suburban community. It saddens me.

I also realize that the council and the planning & zoning people will do what they want to whether a citizen wants it to happen or not. In this day and time in Flower Mound, a promise or the word of the leaders of Flower Mound means nothing, especially if money is involved. I believe that Flower Mound should not keep applying for the award of the Tree City of the United States and should quit bragging about receiving it. This community has cut down more beautiful, old oak trees (that could have been built around) in the name of progress than it can plant twig replacements in the next 50 years.

Yes, I am a resident that loves trees, greenery, a little open spacing and all the other aspects of nature. I am saddened that the growth of Flower Mound could not have been accomplished by staying closer to the original plan. It has been my town a long time. Sorrowfully, it is becoming just another bursting at the seams North Texas city that looks like any other city in this area.

Its charm is quickly disappearing.