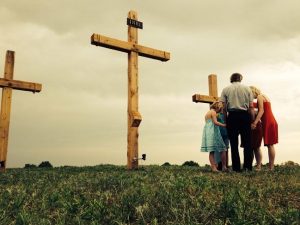 The first Easter Sunrise Service more than 40 years ago on the community-owned and protected Flower Mound started a tradition that continues today.

The Summit Club, The Women of Flower Mound and The Mound Foundation work together to continue the traditional service that started in 1971.

The Annual Easter Sunrise Service will begin at 6:50 a.m. on April 5, ending at 7:15 a.m. shortly after sunrise at 7:11 a.m. Area church youth from The Church of Jesus Christ of Latter Day Saints will present the service, song and praise for the event that has drawn up to 1,400 people.

Those attending should plan to arrive no later than 6:25 a.m. Parking will be at the Tom Thumb parking lot. Comfortable clothing is recommended for the short walk up to the top of the Mound for the sunrise service. If heavy rains occur, the service will be cancelled.

Light refreshments and coffee by local merchants will be available after the services. Find information at www.summitclub.org,www.theflowermound.com, www.womenofflowermound.org or on Facebook.

Located near FM 3040 and FM 2499, The Mound is a protected native prairie grassland covering more than 11 acres and providing a ome to more than 400 species of native flowers.

Sharply divided over politics with annexations and de-annexations, the community of several hundred residents were invited to a rustic service on the Mound started by The Summit Club as a way to bring Flower Mound together.

The first sunrise service on The Mound was held when Edward Marcus owned the site in the early 1970’s. Marcus told Bob Rheudasil, Flower Mound’s first mayor and an employee of Marcus, that The Mound would be a perfect setting for an Easter Sunrise Service. Rheudasil and some Marcus ranch hands made crosses for the first sunrise service in 1971. The Summit Club and Women of Flower Mound have continued the tradition of Easter sunrise services since, according to Mark Glover, a local historian and longtime resident. Glover’s wife, Penny, is Rheudasil’s daughter.

Last year, The Summit Club built new crosses for the sunrise service including a 14-foot main cross with two 10-foot crosses – all made with milled red cedar and hand carved to replicate how the Roman crosses were made.

About The Flower Mound from Mark Glover:

Myths abound about The Mound, including that it was built by an Ancient Culture or is an Indian Burial Mound. Edward Marcus had several locations on The Mound excavated by SMU Archeologists, but no Indian remains were found.

Shards of pottery dated 700 AD were found at the base of The Mound by Sweetie Bowman in the 1970’s. Wichita Indians were the primary Native Americans in Flower Mound, but several other tribes lived in the area as well.

The Mound was sacred for the Wichita Indians and possibly other tribes. Wichita’s buried their dead in sacred ground, and often in high ground. The Mound could be a resting place for some Native Americans.

The very first recorded religious sermon in Denton County was on a Sunday morning in May of 1841, somewhere on Long Prairie. Most likely, it was on The Mound. John Denton, namesake to Denton County and the City of Denton, presided over a morning sermon to Texas Rangers that were in pursuit of hostile Indians who were raiding neighboring settlers.

Bellamah deeded The Mound to the Flower Mound Foundation on July 25, 1983. The Foundation’s purpose is to keep the original character of the site and to promote educational, scientific and historical interests.

The Mound exists today as it did when the first pioneers first saw it. The Mound has never had a plow in it.  The same Bluestem, Indian Grass, Switch Grass and wildflowers grow there as they did hundreds of years ago, when buffalo and antelope grazed them. It is one of the last remaining pieces of unaltered Blackland Prairie.

To watch a video of the history of Flower Mound, visit https://www.youtube.com/watch?v=ZTFOFldTzaM. The Flower Mound documentary is a partnership production between the Town of Flower Mound and The Mound Foundation, a 501(C)3 organization that works to promote the educational, scientific, and historical interests of the site. The documentary takes an in-depth look into the historical roots of “The Mound” and how it plays into the rich history of the area.