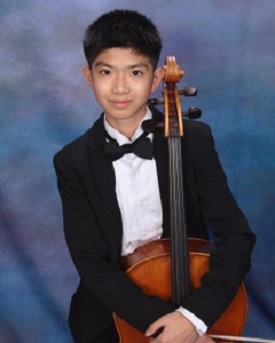 Cellist Sai Sai Ding, 2015 Grand Prize Winner of this competition, will perform February 20 as soloist with the Lewisville Lake Symphony.  Sai Sai will play Tchaikovsky’s Rococo Variations.  In addition to performing with the Symphony, Sai Sai receives the $1,000 Bill and Grace Lawrence Scholarship.

Winning competitions is a habit for the talented 13-year-old cellist.  Since 2010 he has placed first in no less than 8 competitions in Beijing, Prague, Ukraine, Moscow, and the Dallas area.  Born in Shanghai, China, Sai Sai excelled early on both the piano and the cello, but chose to focus on the cello in order to realize his ambition to play in and conduct a major orchestra some day.  Although offered a place at the Tchaikovsky Conservatory in Moscow, he chose to come to Dallas in 2012 and currently studies with renowned cellist Ko Iwasaki.

The Lewisville Lake Symphony, recognized as one of the most respected regional orchestras in Texas, will also perform two works by Beethoven under the baton of musical director Adron Ming.  Symphony No. 7 in A Major was cited by Beethoven himself as “one of his best works,” and Overture to Creatures of Prometheus was his first work for the ballet.

The concert takes place at the MCL Grand in Old Town Lewisville  at 7:30 pm.  Tickets can be booked online atwww.lewisvillesymphony.org and are $25 for adults, $20 for seniors and $10 for students.