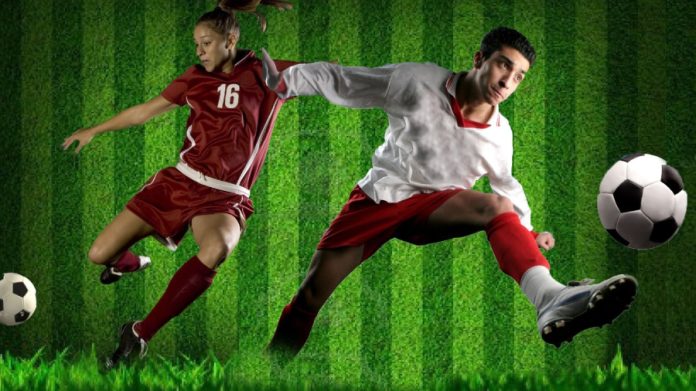 As the 2014-2015 soccer season gets underway, many of the teams of Southern Denton County look to continue upon the excellence they have exhibited in what is known worldwide as “the beautiful game.”

The region is home to some of the strongest soccer talent in the state of Texas and routinely produces multiple playoff teams, capable of long post season runs.

Boys’ Soccer to Pick Up Where It Left Off

This season should be no different on the boys’ side, as three Southern Denton area teams made the post-season in 2013-14 and look to pick up right where they left off last year.

The Marcus boys finished second in district last season with a record of 19-2-4 and reached the regional finals before finally losing.

It was the Marauders 23rd consecutive season to reach the playoffs in the sport of boys’ soccer, and coach John Gall said things are once again shaping up very well for his team.

“As always, preparations have gone very well,” Gall said. “The team is progressing in all aspects.  Expectations are again, very high.”

The Marauders boys’ soccer team enjoys an illustrious tradition, including a national championship in 2007 and back to back state championships in 2007-2008.

Gall said the goal for this year is the same as every other, to make the playoffs and have a long run, and said that in order to do that, it is going to take a couple of things.

“We have to have consistency and an understanding that each team will be out to beat us,” Gall said.

Across town at Flower Mound, the Jaguars captured the fourth and final playoff spot in their district last season, but Coach David Doyle said that may be tough to repeat in 2015.

“We lost a lot of good players in important positions from last year’s team and replacing them will be very difficult,” Doyle said.

Doyle said that he expects Camden Riley and John Satterla to be his team leaders this season.

The Flower Mound coach said that the expectations this season are to make the playoffs, and said in order to accomplish that objective, it will take two things.

“To gel as a defense and have a bit of luck,” Doyle said.

The Guyer boys soccer team wrapped up last season with an overall record of 10-13-2, but earned a post-season berth with a 5-4-1 district mark, good enough for third place in the 11-4A standings.

The Wildcats advanced two rounds in the playoffs following a 5-1 bi-district victory over Aledo.
Coach Cody Schroeder said that he is feeling pretty good about the way things are looking heading into the season, but said there are a few question marks for Guyer as well.

“Guyer lost a tremendous senior class and is replacing it with a small, but excellent group,” Schroeder said.

Schroeder he is expecting the triumvirate of Collin Christian, Chris Lopez and Danny Chicas to lead the way for the Wildcats.

“Danny Chicas has been a player that has grown by leaps and bounds,” Schroeder said. “Moved to the varsity half way through last year, he demonstrates and exemplifies the qualities of a leader by working hard physically every day, being focused and improving his soccer skill.”

Schroeder said the expectations this season “are to work hard and compete every game and give ourselves the opportunity to win the district championship.”

Down in Argyle, coach Daniel Lundy said he has been impressed with what he’s seen from his team so far, as well, and said he expects strong support from a couple of unlikely sources.

“I am very pleased with the way the team is shaping up this year,” Lundy said. “We have some incoming freshmen and transfer students who will really help out.”

The Eagles finished 15-5-3 last season and missed the playoffs by one spot.

Lundy said that is not something his team plans to duplicate in the 2014-15 season and said realignment should help.

“The goal every year is to first win the district, and second, to advance as far as possible in the playoffs,” Lundy said. “Since we are finally able to compete with schools of the same enrollment numbers I expect the team to do very well in the playoffs.”

Lundy said that Drew Estrada and Cory Davis have been the anchors for the team the last two seasons and both return for their third season as starters.

Ryan Schleder, Chad Book, and Caleb Holt have gained valuable experience from kicking for the football team this year, as well, and should also contribute to the team.

To have a successful season and vie for a playoff spot, Lundy said it will take one major thing for the Eagles.

“Replacing the strong leadership provided by last year’s senior class will be the most challenging key to making a long playoff run however,” Lundy said. “Through the first two weeks of practice, I see great communication and encouragement from the team.”

The 2014-15 girls soccer season promises to be a good one for several schools in the Southern Denton County region, as multiple area teams have legitimate shots at post-season berths.

Three local teams advanced to the post-season in 2013-14.

One of those squads, the Marcus girls, finished second in district last season with a 14-4-6 overall record and advanced to the regional quarterfinals.

Coach Chad Hobbs said he is impressed with the way his team has performed early on this season and said he believes that Marcus should be quite competitive.

“Our team will be very balanced this year,” Hobbs said. “We have a strong group of upperclassmen mixed with a very talented group of freshmen.”

Marcus defeated Euless Trinity in the bi-district round and Belton at area before losing 1-0 to Coppell last season in the playoffs, and Hobbs said he has a number of players he believes can step into leadership roles for the Lady Marauders this season to help them get back.

“With so many talented attacking players, it will be difficult for opposing defenses to keep us from scoring goals.  “Our defense will be led by sophomore keeper Peyton Bauman and our starting backs, senior Maddie Beltzer, sophomore Grace Kellner, freshman Olivia Kovach, and freshman Kaity Hemperly.”

Hobbs said he just needs for his team to avoid injuries this year if it wants to have a chance at achieving its annual goal, which is to win a state championship.

“In order for our team to go deep and attempt to get to state then we must remain healthy,” Hobbs said.

“Our team was decimated with injuries last season.  We played the entire season with six to seven starters out of our lineup due to injury, but were still able to reach the regional quarterfinals, only to lose in a penalty shootout.  If we stay healthy, then our group is talented enough to beat any team in the state.”

Across town at Flower Mound High School, the Lady Jaguars finished third in district last year and advanced to the area round of the post-season where it lost to Midlothian by a score of 1-0.

Coach Trina Hutsell said that things are shaping up well for this season and said she has been encouraged by what she has seen so far.

“So far we are working well as a team and strengthening our build up play,” Hutsell said.

Hutsell said she also has a number of players she expects to lead the way for the Lady Jags this season.

“Tori Stratton, Makenna Johnson, and Jordan Mulnix are all returning senior starters and will do a great job leading with communication on the field, as well as sophomore Dawson Depperschmidt and juniors Ashlan Hustava and Megan Heckendorn,” Hutsell said. “Seniors Claire Marr and Sarah Stewart also return to the center of the field to direct the team and keep our center tight.  Caitlin Aaron returns in goal this season and she does a great job of directing the defense.”

In order to repeat on the type of success Flower Mound enjoyed last season, Hutsell said it will take a couple of things.

“We have to work together as a team and really trust each other to do the work needed to push past our opponents,” Hutsell said. “Every game will come down to those final minutes of who wants it more.”

Over in Denton, the Guyer girls’ soccer team is coming off of a phenomenal season, in which they advanced four rounds in the playoffs before losing to Fort Worth Arlington Heights.

The loss of last year’s district MVP, Hannah Alspach, will have a major impact on the team, but the Lady Wildcats also return some good talent.

Co-Offensive Player of the Year, Brittany Crabtree will help lead the way for Guyer this season, as will all district selections Kylie Cobb, Morgan Wessling and Gairy Natividad.

Guyer will face some heavier hitters in its new district and larger classification, but look for the Lady Wildcats to once again vie for a district title.

In Argyle, the Lady Eagles finished 15-10-3 last season, but went 3-6-1 in district and missed the post-season by one spot.

Coach Jennifer Goodpaster said she is optimistic about this season for a couple of reasons.

“The Argyle Girls’ team is excited about finally entering into the 4A division for the first time because the true talent of the team will finally shine since they are competing against their peers,” Goodpaster said. “With five talented seniors, Allyson Book and Madison Lee both made first team all-district in 5A last year, are returning, as well as Abby Neece, the sophomore who made first team as well.”

Goodpaster said that “the team leaders for the offense will be Madison Lee, our senior forward.  She scored seven goals last year with three assists, and she was our second highest goal scorer, behind Hannah Neece, who now starts at University of Arkansas.  Cassie Hargroves, also a senior, can attack out of the midfield and distribute balls with excellent skill.  Our defensive anchor will definitely be Allyson Book, she orchestrates our back line like Mozart, and Megan Manos, our main marker back.”

To have a successful season, Goodpaster said it will take two things from her team.

“To make the playoffs and excel, we will need to stay healthy and maintain our focus on the prize,” Goodpaster said.

The Liberty Christian girls missed the post-season by one spot as well last season, but coach Sarah Hawkins said that a victory over Ursuline this season has her feeling good about the Lady Warriors chances in 2014-15.

“This year’s squad has the potential to be great and go far into post season,” Hawkins said. “They are connecting well on and off the field. We have many of the same girls and they have had two to three years of playing together now. I’m excited to have depth this year that we did not have last year due to numbers and injuries. We have added six freshman to the roster.”

Hawkins said the objective for this season is to make a long run into the post-season and said her team must continue to work hard and improve daily to get there.

“If my team wants to make a run at the playoffs, we must continue get better every single day and stay focused,” Hawkins said. “We must compete against every team in our district as if it’s do or die and not let up. We need to continue to win those games that are in our favor and be ready to battle against those squads that are very strong.”