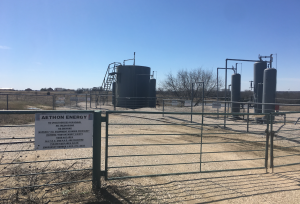 A diesel compressor station in Northlake is moving away from neighborhoods into a more rural part of the town.

The Aethon Energy compressor station is currently located on Mulkey Lane, just south of FM 407, near The Highlands neighborhood and the Northwest ISD Outdoor Learning Center. Northlake Mayor Pete Dewing said at some times, the four diesel compressors make noises and fumes that residents nearby can hear and smell.

Realty Capital, developer at The Highlands, wanted Aethon to relocate the station, but their negotiations came to an impasse and a lawsuit was filed to compel Aethon to move, Dewing said. Dewing brought both sides to the table at Northlake Town Hall to come up with a workable solution. After a bit of back-and-forth and compromises on both sides, Aethon and Realty Capital signed an agreement for Aethon to relocate the compressors.

There is already one compressor on a site near Denton Creek, south of Quail Creek Shooting Range on FM 1171 and west of Interstate 35W. Aethon will move its compressors from the Mulkey site to this site sometime this year.