A Lantana couple is hoping to help people understand ADHD better after releasing their book about living with the disorder.

Leigh Macneil, 44, grew up with Attention Deficit/Hyperactivity Disorder in a time when few people understood what the disorder was and how to treat Macneil.

“I was in classes with kids with Down Syndrome, because they didn’t know where to put me,” Macneil said. “I was asked not to return to class in the first grade. The problem was, people didn’t understand how I learned.”

Macneil said he learns much faster by seeing or hearing something explained, not just reading it.

“In math class, I had a hard time reading the textbook and then taking a quiz,” he said. “But as soon as I see it done in front of me in class, I know it. I would bomb that quiz before class, but I would be the first one to turn in a test later.”

Similarly, nowadays Macneil reads books after listening to the audio book first. He finishes 30-40 books a year that way.

“I couldn’t do that without understanding how I learn,” he said.

Today, there are more resources for parents and teachers to understand ADHD, but a lot of books about it are “very clinical or very comical,” and most of the news stories and other materials online are negative. Macneil and his wife, Renee, wanted to change that.

“A friend of mine has a 9-year-old son with severe ADHD,” Renee said. “They liked to hear stories of Liegh’s difficult childhood … they were inspired by them, because they see Leigh turned out OK.

“They thought other people should hear them too, so they know there’s hope out there.”

That gave the Macneils the idea to write a book together that was not too clinical, comical or negative. Instead, it combines short clinical explanations illustrated by anecdotes from Leigh’s life, with advice for how to keep things positive.

“I’m not speaking as an expert, but this was my life, this information is out there,” Leigh said. “There are plusses and minuses to ADHD.”

Renee, a former English teacher, would listen to Leigh’s stories and write them for the book, which they chose to call “Spaz: The True Story of My Life With ADHD.” Leigh said he wanted to use the derogatory term for people with ADHD and turn it on its head. 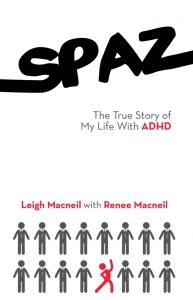 “The word ‘spaz’ is the ultimate insult, but it was my nickname growing up,” he said.

“He’s learned to embrace it, and take back that term,” Renee said.

Leigh said he also wanted the book is because of how flippantly people use the terms ADD or ADHD.

“When it’s used casually like that, it devalues the true struggles with the disorder,” he said.

The Macneils hope that the book will help parents know more about the positives and the real effects of ADHD, and to encourage them to ask more questions of teachers and doctors.

“If your child is diagnosed with ADHD and Google is your first introduction to it, you’ll be devastated,” Renee said. “We want to change that, and we want them to feel hopeful and inspired.”

The Macneils will be having a book release party on Oct. 21 at Piranha Killer Sushi, 5801 Long Prairie Road in Flower Mound. From 6-10 p.m., folks can meet the authors and get signed copies of the book.