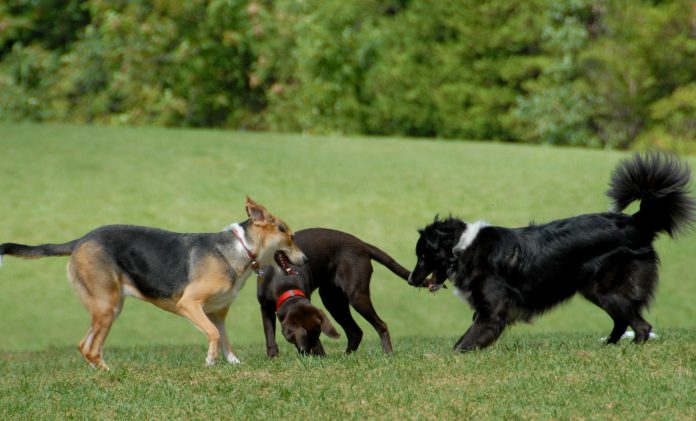 The town’s first dog park will soon be under construction after Flower Mound Town Council members approved a construction agreement for Heritage Park. The park is expected to open in an October-November time period.

The approved base bid was for $796,709.50 which serves as phase 2 of the park’s overall construction. The park will eventually include demonstration gardens, a park trail, an 18-hole disc course and more.

Gloria Jones, chair of the Parks, Arts and Library Services board, said she has been part of process from the beginning from visiting other dog parks to early discussions.

“We know this is going to be a great facility,” she said. “It would be a shame not to pass just the basics.”

When queried by Mayor Tom Hayden, Jones said the pedestrian benches, boulders, landscape plantings and shade structures were important though the kiosk could wait.

Councilmember Bryan Webb proposed a motion for the base-level dog park with a suggestion for separate a la carte items.  The motion passed 4-1 with Councilmember Steve Dixon voting against it.

Dixon said he’d told the council from the beginning that he would not vote in favor of a dog park costing more than $500,000.

Webb proposed a motion to accept additional items including soil amendments, moving boulders, 12 pedestrian benches and an entry sign. The motion carried 4-1 with Dixon voting no.

The council did not make a motion regarding shade structures, landscape plantings and a kiosk, which were part of the proposed additions. They will not be part of the park when it opens later this year.

2L Construction LLC will construct the dog park with several additional items approved by the council.

The bid proposal followed discussion earlier this year to itemize elements of the second of three options to allow the council to select what they wanted for the proposed 5-acre dog park before accepting a final bid.

Clint Wofford of Schrickel, Rollins and Associates of Arlington outlined three proposals in a discussion earlier this year that offered options for a dog park with price tags ranging from $704,648 upward to about $1.3 million.

The town council’s preferred option, at a preliminary estimate of $873,020, included a 1-acre area for small dogs at the north end of the Heritage East property with a 2.2-acre area for large dogs just south. A third area offers an option of a connecting bridge to an area that could be used for large dogs to allow town crews to rotate the large dog areas for upkeep and maintenance.

The plan included an estimated 40 parking slots, a chain link fence and a sidewalk from the entrance to shaded areas where park benches could be located. Other amenities proposed were a dog wash area, a drinking fountain for dogs and enhanced landscaping and signage – options council members asked to be listed separately for consideration.

All of the options included a 15-percent contingency plan to cover varied bid proposals – a point questioned by several council members. The only option that included lighting for the park was the third option, which Wofford said accounted for much of the cost difference between the second and third proposals.

In September, Mayor Pro Tem Jean Levenick voted in favor of putting the second option to bid but with an eye to prioritizing money spent on parks. “It’s important to me that we bring our parks up to standard and minimize the new dog park,” she said.

Covington, who spoke to the town council wearing a t-shirt bearing a photo of Paddy who died five years ago as of July, said she had worked on bringing a dog park to town for years, even working to bring a petition with at least 400 signatures to the town council.

“I’ve been patient, worked with the system and I’ve been nice,” she said at the September meeting. “It’s time to pick up a shovel, dig some dirt and get moving.”