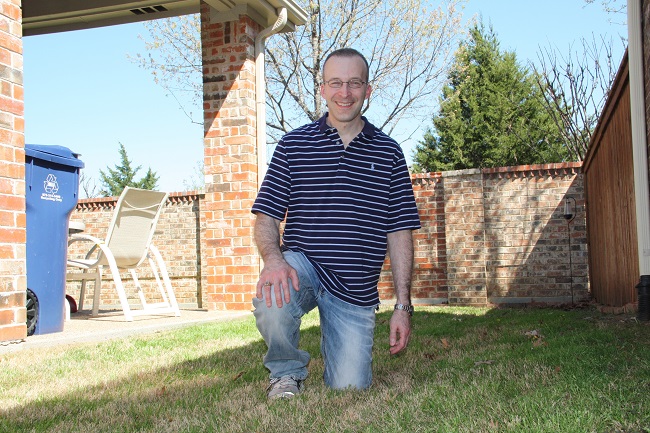 After dark one day last fall, Lantana resident Phillip Herr was moving the recycling bin from his front yard to the back when he felt a small bite on his ankle.

At first, he thought it must be a lizard. But it would soon become a date his family clearly recalls – October 10.

Finishing his task, Herr went inside his home in the Sonora neighborhood as sat down on the sofa.

“I was starting to feel a sensation in my left leg, like heat,” Herr recalled recently. His physician wife, an OBGYN, donned a pair of boots and walked outside where she spotted a copperhead snake. Immediately, she called 911.

“I was taken to the hospital,” Herr said, recalled a two-day stay in ICU and three days total at Texas Health Presbyterian Hospital Flower Mound.

Meanwhile, a neighbor and a firefighter killed the snake, described as being between 18 inches to around 2 feet long.

Herr, who was snagged by only one fang, says he was surprised that the snake knew exactly where to bite him. Wearing shoes, Herr said only the area around his ankles was uncovered. The snake bit him right on the bone of his left ankle.

“I didn’t know until later that snakes can sense body heat,” he said, adding that he has done more research on snakes after having the close encounter with the copperhead.

The venom of a copperhead acts like a coagulant, which can cause different issues in the human body than the venom from a rattlesnake. Though he received the anti-venom, Herr suffered A-Fib while in the hospital and later had to undergo physical therapy to get back to running in marathons.

“It was one to two months before I was feeling truly better with some sense of normalcy,” he said, adding it was at least a week before he could begin walking on his leg.

Recalling the incident, Herr said he never expected to find a snake in his yard, which doesn’t back up to any wooded areas. His house is several blocks away from the 9th hole at the Lantana Golf Course.

However with spring’s arrival so too comes more movement as snakes venture away from their wintry hideouts.

Michael McComb’s family pet died after being bitten near Lantana’s north pond in an area where he has watched children fishing. It was the second year in a row that a family pet had been bitten by a snake – only, the first time, the dog survived. McComb said they believed their dog was bitten by a water moccasin, also known as a cottonmouth.

With the recent activity, Mark Norton of the Lantana Community Association, says they will again use the services of a snake wrangler to check near the swimming pools and the north pond in the public areas. He suggests residents be aware of their surroundings and, if a snake is spotted, to call Denton County Animal Control Services at 940-349-1600.

Texas is home to more than 105 species and subspecies of snakes with only 15 of them potentially dangerous to people and pets, according to Texas Parks & Wildlife.

Copperheads have chestnut or reddish-brown crossbands on a lighter colored body and are generally found in rocky areas and wooded bottom lands. The broad-banded copperhead, usually about 2 feet long, are found in central Texas.

Cottonmouths, also known as water moccasins, can be dark brown, olive-brown, olive green or almost solid black. It is commonly found in rivers, ponds and streams, deriving its name from the white tissue inside its mouth which can be seen when the snake feels threatened. It averages about 3.5 feet in length.

Rattlesnakes, generally around 2 feet in length, are light gray with brown oval blotches along the middle of the back and smaller blotches on each side. They are usually in grassland, marshes and swamps. The prairie rattlesnake is a slender rattler of greenish or grayish color with rounded blotches in the middle of its back. It can be up to 3 feet long on average.

Tips for homeowners or people enjoying the outdoors include:

1. Keep the lawn around your home trimmed low
2. Remove any brush, wood, rock or debris piles from around the home.
3. Always wear shoes while outside and never put your hands where you can’t see them.
4. Be careful when stepping over fallen logs and rock outcroppings
5. Take care along creek banks and underbrush.
Snakes try to escape when threatened but will bite when surprised or cornered, according to Texas Parks & Wildlife.

If you think a snake has bitten you, always assume the worst:

1. Look for fang puncture marks. Symptoms include an immediate burning pain at or near the bite site with progressive swelling with minutes.
2. Identify the species of venomous snake that bit you. Have someone take care of the snake to keep it from biting anyone else.
3. Stay as calm as possible to reduce spread of the venom and onset of shock.
4. Reduce movement as much as possible
5. Wash the bite area with disinfectant if possible but DO NOT make incisions over the bite marks
6. Get to a medical facility as quickly as possible. Anti-venom treatment is generally most effective within the first four hours of being bitten and is considered ineffective after 8-10 hours.

Phillip Herr, who could not have known a walk in his fenced yard inside his suburban neighborhood would lead to a snake bite, says he is now more aware of the potential.

Nowadays, the civil litigation attorney keeps a pair of boots and a flashlight handy – just in case he needs to step outside after dark.

“I never would have thought there would be a copperhead in our backyard,” he said, adding that just hours before he was bitten, his wife and two young children were having a picnic in the backyard not far from where the snake was lurking.

“I’m glad it was me and not anyone else in my family,” he said.