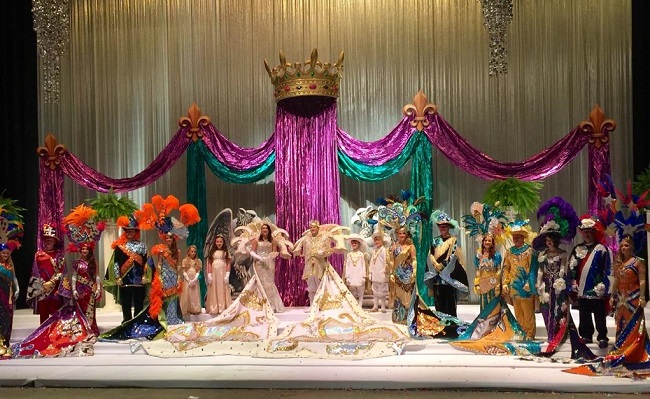 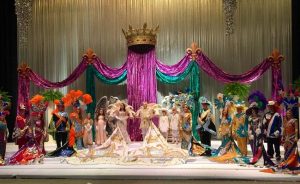 When you think of Mardi Gras, New Orleans usually comes to mind. Well, actually there’s countless Mardi Gras celebrations that go on all over the deep south – from Galveston, Tex., to Pensacola, Fla., and everywhere in between. Mardi Gras is an unofficial holiday and it belongs to everyone!

The origins of this unique tradition can be traced to medieval Europe but made its way to America in 1703. The tiny settlement of Fort Louis de la Mobile celebrated America’s very first Mardi Gras. Today millions participate in this carnival season. It is very festive, extravagant, crazy, fun, exciting and bizarre all rolled up into a very unique cultural event like nothing I’ve ever witnessed or experienced before in my life!

Last week, Ron and I were honored to be part of the Gulf Coast Carnival Association Mardi Gras celebration in Biloxi, Miss. It is steeped in tradition having been in existence for the past 107 years. It’s the Mississippi Gulf Coast’s oldest and most prestigious Carnival organization. The GCCA leads the way in providing the greatest free show on the Gulf Coast. Its Mardi Gras Day parade has been judged one of the best, and its King d’Iberville and Queen Ixolib are considered the official royalty of Gulf Coast Mardi Gras.

A Summer Social in August is when things get kicked off in Biloxi for the annual event in February. That’s when organizations like the GCCA get a head start on their 100-year Mardi Gras celebration. This is a huge community endeavor and requires the work of countless volunteers, local governments and public safety officials who spend thousands of hours to make Mardi Gras a successful event. Community Sponsors are also an integral part of creating this special event for the Mississippi Gulf Coast residents and guests.

We were invited, by college friends, to an exclusive Royal Reception where the identity of the King D’Iberville David Reiman, Queen Ixolib Alexa Carter and their Royal Court were first revealed. The Royal Court consisted of the king and queen, eight maids, eight dukes and several children who serve as a page.

The Royal Reception was held the weekend before Mardi Gras at the host hotel. This year it was at the beautiful newly-renovated Golden Nugget Hotel and Casino. After the Royal Reception, we all headed upstairs where the Royal Court had taken over the sixth floor. The rooms of the Royal Court were open to view and were decorated beyond belief. I cannot even begin to describe the detail, personalization and extravagant decorations … all for a few days. There also was free food, drinks and beads in every room for the taking. Hundreds of people were on the sixth floor at the same time. I’m not sure how in the world they got around the fire code. It was fun, crowded and very crazy! 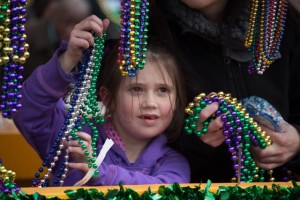 The Coronation Ball was the next big event and is the night before the grand Mardi Gras parade. We got to experience the pageantry of the coronation of the royalty. The customized costumes could rival any production in Las Vegas or Broadway show in New York City. It was lengthy, but impressive! This event paid tribute to historical and literary themes with different tableaus and masked royalty steeped in the kind of ceremonial drama worthy of a classical epic.

While the colors, the decorations and the costumed characters significantly change from year to year, the selection and composition of the royal court does not. We were witness to the Coronation of King d’lberville and Queen lxolib, sovereign rulers of Mardi Gras. “Coastal, A State of Mind” was the theme this year as we viewed the regalia of the king, queen, pages, maids, dukes and flag bearers.

We then transitioned to a ballroom at the Mississippi Gulf Coast Coliseum and danced into the night with the royalty, GCCA members and guests. An Atlanta band played all the good oldies and the southern women were stunning in their gorgeous gowns with handsome men in tuxedos at their side. It was quite a beautiful and formal affair!

This century-old tradition came to a close the next day on “Fat Tuesday” with a fantastic carnival parade in downtown Biloxi. It was a culmination of all the Mardi Gras festivities. Purple, green and gold Mardi Gras beads, stuffed animals, cups and doubloons were thrown from more than 100 beautifully decorated floats.

Some floats are elaborate and beautiful while others are funny and satirical. Many krewes have a theme to their parade each year with floats created to reflect those themes. Thousands of dollars are poured into making these floats, and they’re not made overnight. Krewes work on these creations year-round, often at secret locations. Krewes take their floats very seriously. Parades are a major part of celebrating Mardi Gras. Ever since krewes began parading through Biloxi over 100 years ago, parade floats have played a major role in Mardi Gras history.

In addition to all the GCCA activities, we also went to the homes of college friends for extended Mardi Gras parties. The specialty drinks, festive decorations and tasty food, especially the seafood, were outstanding! Our many Mississippi friends were so welcoming and were the epitome of showing true “Southern Hospitality.” Mardi Gras is a great southern tradition and is done very well on the Mississippi Gulf Coast.

Terri Guthrie writes about her travels both in and out of the U.S. for The Cross Timbers Gazette.  For more photos from her travels, check our Facebook page. Photos are by Maj. Gen. (ret.) James Poss, USAF.