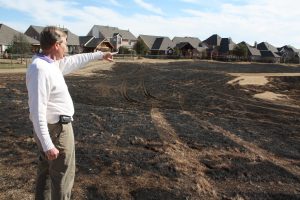 The blaze started just after 9:00 p.m. on the south side of Bonham Parkway between Meadows Avenue and Mason Street.

Lantana resident Mike Lewis said he and his wife heard fireworks going off next to their home which abuts the golf course.

“We looked out the window and saw flames coming from the course.” said Lewis.  “We and other neighbors ran out to help try to beat down the flames while others called 911.  The fire department was here in less than five minutes.”

A citation was issued to the individual who caused the fire and they will be held responsible for the damage, according to Argyle Fire Chief Mac Hoenberger.

Fireworks are allowed in Lantana but only on private property with permission from the landowner.

Witnesses reported seeing several teenagers dressed in black running from The Mound as the fire was being reported.