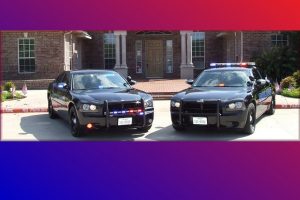 The following incidents were reported by the Double Oak Police Department:

06-22-17 – Suspicious Activity – 200 blk. McMakin Rd., Double Oak – Investigator Murphy received a call from a homeowner reporting that an unknown male called her landline and identified himself as a City of Lewisville employee. He said that he needed to inspect the exterior of her property for an unknown reason. Complainant told him no. Investigator Murphy went to McMakin Rd. and checked the property. The complainant was the only person on property. The homeowner was instructed to call for the police if anyone showed up as a result of the call.

06-29-17 – Arrest – 100 blk. McMakin Rd., Double Oak – Double Oak Investigator notified that an arrest warrant for Ryan Arruda, 20, was executed by the Sheriff’s Department.  Mr. Arruda is alleged to have evaded detention by law enforcement in a vehicle that had three passengers (Bartonville PD attempted to conduct a traffic stop).  Mr. Arruda, while driving at a high rate of speed, lost control of a 2007 Hyundai Tiburon in the 100 blk. of McMakin, Double Oak and wrecked in a field.  Mr. Arruda is alleged to have then fled on foot leaving his identification behind in the car.

06-30-17 – Meet Complainant – 200 blk. Double Oaks Dr., Double Oak – A homeowner reported that they had forwarded a substantial amount of money to a contractor that has only performed a fraction of the work and left her home damaged.

06-30-17 – Credit Card Abuse – 300 blk. Waketon Rd., Double Oak – A resident reported that their credit card had been used to make fraudulent purchases at a wide variety of locations in the Houston area.

07-02-17 – Possession of Drug Paraphernalia – 8300 blk. Justin Rd., Double Oak – A Double Oak Officer was working traffic enforcement at approximately 2:11 a.m. when he stopped a vehicle for allegedly traveling at 106 M.P.H. in a 45 M.P.H. traffic zone.  During the investigation of the offense it was determined that the driver was an unlicensed juvenile with three juvenile passengers.  Parents for all involved parties were contacted and citations for possession of drug paraphernalia were issued.

07-06-17 – Theft – 200 blk. Valley View, Double Oak – A homeowner reported that a handgun and bottles of alcohol were removed from his residence without permission.    There was also substantial physical damage to the residence.  The investigation into the theft and damage is ongoing.

07-07-17 – Criminal Mischief – 100 blk. W. Carruth, Double Oak – During the previous night, or early in the morning, an unknown person broke the back passenger window of the complainant’s pickup truck.  Complainant was unable to find anything missing.

07-07-17 – Burglary of a Vehicle – 100 blk. W. Carruth, Double Oak – A resident reported that their father’s pickup truck had been broken into but it was unknown if anything was missing.

07-07-17 – Burglary of a Vehicle – 300 blk. E. Carruth, Double Oak – A resident reported that their pickup truck had been entered, by an unknown person, and a laptop computer taken without permission.

07-13-17 – Duty Upon Striking a Fixed Object – 100 blk. Foxtrot Ln., Double Oak – A known person lost control of their vehicle and became stuck in a neighbor’s culvert after damaging the lawn/mailbox.  The owner of the car has been contacted.

07-17-17 – Evading Arrest – 200 blk. Simmons Rd., Double Oak – A Double Oak Officer was working traffic enforcement at approximately 9:43 p.m. when he observed arrestee William Graham speeding. The officer attempted to conduct a traffic stop but the suspect refused to pull over. The motorist drove through Double Oak and onto FM 407 obeying most traffic laws (well he was supposed to pull over for the marked police vehicle), and then traveled to the intersection of Chinn Chapel and FM 407. The motorist then decided to attempt to flee southbound on Chinn Chapel in Flower Mound.  Due to driver inattention the motorist drove directly into the traffic roundabout at the intersection of Chinn Chapel and Dixon. After the accident, and a brief visit at the hospital, Mr. Graham was taken into custody for an active Aggravated Assault with a Deadly Weapon warrant out of Tarrant County and Evading Arrest in a Vehicle.

0 0 0 0 0
Previous : Flower Mound Police Blotter
Next : The Arts in Southern Denton County… and Beyond