Foodie Friday: BBQ on the lake at Tredway’s 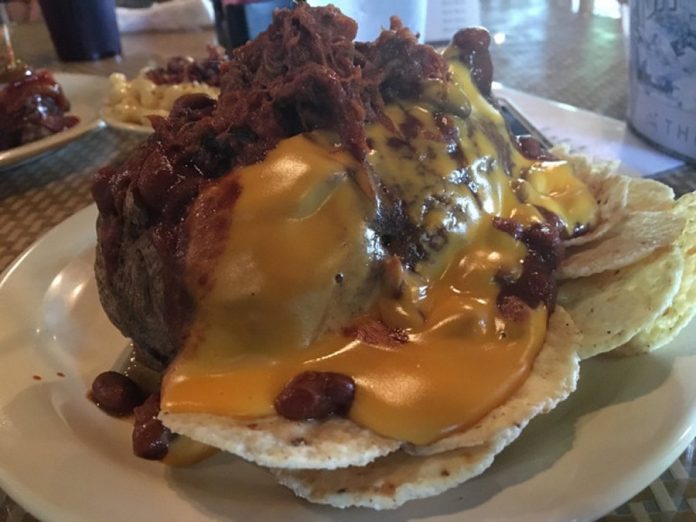 It would just feel wrong to talk about anything else but BBQ on the Friday before Memorial Day weekend. As the official kick-off to summer, this is the perfect weekend to enjoy some ‘cue with friends, family and neighbors!

We’re privileged to have several great BBQ joints in our area, and this week we visited a new spot to add to the list – Tredway’s BBQ in Lake Dallas just minutes from Lake Lewisville.

And not only did we get the chance to enjoy some delicious food, but we also got to enjoy our meal with owner, Lori Tredway, as she told us the story of how Tredway’s came to be.

While their official storefront just opened a little over a year ago, Tredway’s has actually been a staple in northern Denton county for several years. Lori and James first started selling their BBQ as they traveled around to fairs for nine years, and then settled in Denton County selling their food on the side of the road off of FM 2181.

Then in April 2015, they moved into the old Neil’s Italian location near Lake Lewisville, and have been continuing to serve their BBQ recipes to their loyal followers and newcomers alike!

So, let’s talk about what some of those delicious recipes are.

We started out with one of their most popular appetizers – the Tredway Poppers – which are like meat lollipops stacked with smoked sausage, sliced beef, onion, pickle and jalapeno and smothered in their house made sauce.

And for our entrees we went with the Loaded Spud stuffed with chopped brisket, cowboy beans and cheese and the Rib Basket with a side of their Mac ‘n Cheese. Now, let’s talk about these ribs for a minute. These things define the saying “fall-off-the-bone.” The meat was so tender and flavorful. I could have eaten three baskets worth of these ribs. And the Mac ‘n Cheese topped with shredded cheese and bacon was a definite winner in our book as well.

We had heard a lot of great things about their Pecan Cobbler, so knew we had to finish with that for dessert. And it did not disappoint! It’s like the perfect gooey center of a pecan pie, but with every bite!

Tredway’s has some big plans for their future. They’re looking to expand their live music offerings on the weekend by building an outdoor stage where they can host bigger bands to entertain customers while they eat. They also just recently opened up the back bar area, and have plans to build a front patio as well.

So, if you’re in the mood for some BBQ this Memorial Weekend, head towards Lake Lewisville and check out Tredway’s BBQ. They all couldn’t be nicer, and it’s the perfect authentic BBQ environment to enjoy with friends and family!

Hope you all have a great 3-day weekend full of scrumptious food and time with those you love the most!