It’s been 17 years since a full day passed without someone dying on a Texas roadway. The Texas Department of Transportation wants to “end the streak.”

TxDOT said in a news release this week that there has been at least one fatality on Texas roadways every day since Nov. 7, 2000.

“In an effort to end this grim and deadly 17-year milestone,” TxDOT is reminding Texans of its #EndTheStreakTX campaign, urging drivers “to stay alert, obey traffic laws and take personal responsibility behind the wheel.”

“It’s heartbreaking to know somebody has lost a spouse, child, friend or neighbor every day for the past 17 years on Texas roadways,” said TxDOT Executive Director James Bass in a prepared statement. “According to the National Highway Traffic Safety Administration, 94 percent of these deadly crashes are due to driver error — things like distracted driving, speeding and drunk driving. We can stop this deadly streak if every driver makes it a priority to be safe, focused and responsible. Let’s end the streak.” 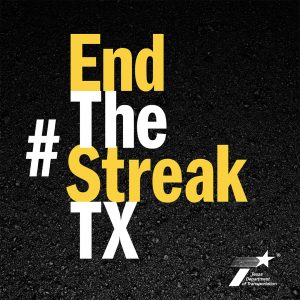 TxDOT is asking people to change their social media profile pictures to the image available for download here. Throughout November, TxDOT’s social media pages will share facts and information about the last 17 years of roadway fatalities and invite Texans to publicly show their commitment to ending the streak of deadly days by sharing these posts with the hashtag #EndTheStreakTX, the news release said. TxDOT also will invite the public to share personal stories of loved ones lost in car crashes on its social media pages using photo and video testimonials with the hashtag #EndTheStreakTX.

Since Nov. 7, 2000, fatalities resulting from motor vehicle crashes on Texas roadways have numbered 59,388. The leading causes of fatalities continue to be failure to stay in one lane, alcohol and speed. To decrease the chances of roadway crashes and fatalities, TxDOT reminds drivers to: