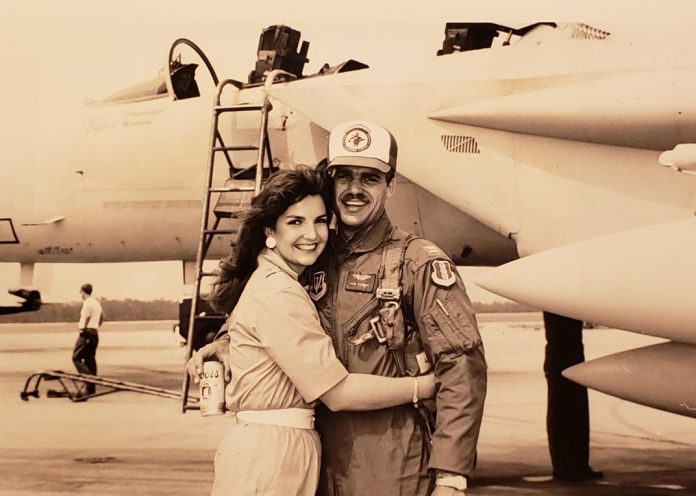 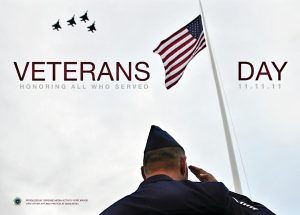 “Some people live an entire lifetime and wonder if they have ever made a difference in this world. A veteran doesn’t have that problem.”  – Ronald Reagan

America’s veterans are a national symbol of what makes our country great!  We may not know them all – but we owe them all! That is why we celebrate Veterans Day every year on Nov. 11. Veterans Day is observed as a legal holiday to honor all our veterans from all armed forces – past, present and future.

Here are a few Veterans Day facts you may not have known about this annual American holiday.

*Raymond Weeks, a World War II veteran from Alabama, came up with the idea in 1945 to honor all veterans on Nov. 11.

*France, Britain, Canada, and Australia also honor World War I and II veterans on or near Nov. 11.

*There were approximately 400,000 members of the United States military killed during World War II.

*In 1921, on November 11th, an American soldier was buried at Arlington Cemetery. His identity was unknown, so his gravesite is called the Tomb of the Unknown Soldier.

*Every year on Veterans Day, Nov. 11, at exactly 11 a.m., at the Tomb of the Unknown Soldier, there is a formal ceremony and the President will lay a wreath on the grave. Also, at Arlington National Cemetery there is a ceremony to honor all who have died in war.

*Across America, on Veterans Day, there are hundreds of parades and ceremonies held to acknowledge and thank all veterans for the sacrifices they have made for our freedom.

One hundred years ago, on Nov. 11, 1921, the World War I Unknown Soldier was transported, by a procession, to his final resting place in Arlington National Cemetery. This year, they are recreating elements of that procession, to observe this pivotal moment in American history as thousands of Americans did in 1921.

As you walk through the cemetery, you may see a horse-drawn caisson carrying an American flag-draped casket, hear the firing of three rifle volleys in the distance, or feel a lump in your throat as a lone bugler plays the 24 lingering notes of Taps. These honors remind us of service, sacrifice and valor. Today, approximately 400,000 veterans are buried at Arlington National Cemetery. Service members from every one of America’s major wars, from the Revolutionary War to today’s conflicts, are interred at Arlington National Cemetery. As a result, the history of our nation is reflected on the grounds of the cemetery and it is very powerful! 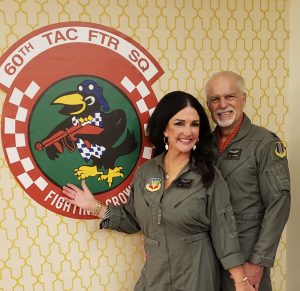 On a personal note – I am proudly married to a veteran. And as a wife, I have had some amazing, and very unique opportunities and experiences. Just a couple of months ago, I actually got to attend a Full Honors Funeral at Arlington National Cemetery. It was for our friend, Colonel Rich Hill who was a USAF F-15 Fighter Pilot with my husband Ron. What a meaningful ceremony for Rich’s wife, Donna Jean and their sons and family. This was one of the most beautiful, yet sobering, experiences of my lifetime that will be etched in my mind forever. 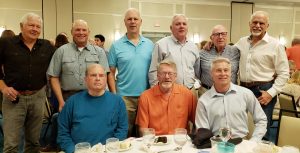 We, along with our friends Mike and Judy Smith from Georgia, attended Rich’s funeral together in Washington D.C. Mike was also a Fighter Pilot with Rich and Ron. The last weekend in October, once again, we were with Mike and Judy, now in Florida, in a room full of military men and their spouses – about 500 people. It was a Fighter Pilot Reunion for current and former USAF Fighter Pilots from the 33rd Tactical Fighter Wing at Eglin AFB, Florida. These F-15 and F-35 pilots and spouses had an amazing 4 days together … reuniting and reminiscing about our military days gone by. What makes this extremely tight-knit “brotherhood” is: They are on “the pointy end of the sword”; they fly extreme performance, combat aircraft solo; they fight air-to-air combat one-on-one; it is very personal and very dangerous; even in peace time, Fighter Pilots are lost every year as air combat training is so extreme; they face forces on their bodies during air combat maneuvers that are beyond comprehension; many pilots have died by losing consciousness (blacking out) during these maneuvers; all of these things and much more lead to a unique band of brothers and tightly bonded fraternity of warriors. 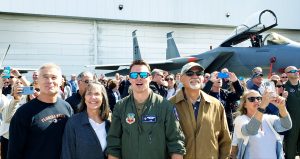 This reunion really emphasized the important role that every veteran has contributed, experienced and lived. On a lighter note – I loved hearing all the ‘call signs’ again. None of the fighter pilots call each other by their names – only by their call signs and some are very creative, it’s such a fun tradition. Because our last name is Guthrie, “Arlo” is my husband’s call sign. This is Arlo’s personal experience as a veteran, and although every veteran’s experience is different, it’s just as personal to them! 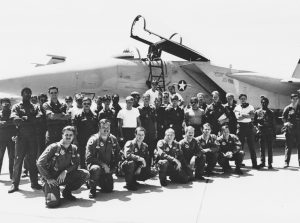 Getting to celebrate these patriots, these veterans, the ones living and deceased, at the reunion was something extremely special and something I will never forget! I was very moved when I overheard my husband and his pilot friends say to each other that “they had never felt so honored in their life”…mission accomplished!

The evening was finished by General William R. Looney III (retired) reciting this piece below that he had recently heard at a funeral of a veteran. I think it simply says it all.

It is the Warrior

It is the Warrior, not the reporter, who gives us a free press

It is the Warrior, not the poet, who gives us free speech,

It is the Warrior, not the judge, who gives us justice

And it is the Warrior, not the clergy, who gives us religious freedom

Serves under the Flag

For the Warrior brings

Hope in time of Crisis

Strength in the face of adversity

And most of all, a Guarantee

Of Peace and Freedom

For all generations of Americans now and forever

In essence, It is the Warrior that makes the American Dream possible

Veterans, thank you—today and every day—to all of the brave men and women who have served and sacrificed so that we may be free, because we know ”Freedom Is Not Free!”  Veterans, we salute you and we thank you with our sincerest respect, honor and gratitude!!!